Based on the ‘Love Monster’ series of books by British author and illustrator Rachel Bright, new 2D-animated preschool series will premiere on CBeebies and on major Chinese broadcasters and digital platforms. 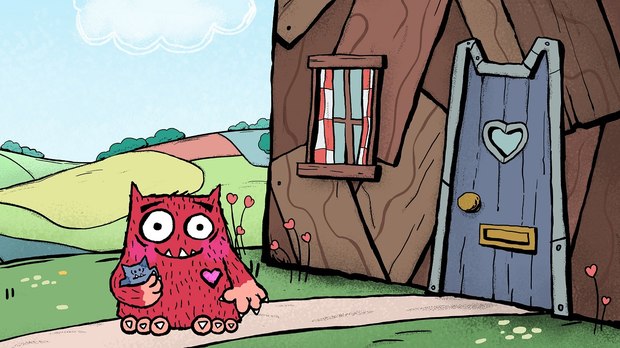 Boat Rocker Studios and the BBC have entered into a partnership with UYoung to co-produce a new animated preschool series based on the “Love Monster” series of books by British author and illustrator Rachel Bright. In a ground-breaking collaboration the 54 x 7’ 2D-animated series will premiere on CBeebies and on major Chinese broadcasters and digital platforms.

The co-production was approved by China’s National Radio and Television Administration (previously known as SARFT).

Canada’s Boat Rocker Studios (a division of global media company Boat Rocker Media) and BBC Children’s are excited to be collaborating with a respected Chinese company that brings a truly international collaboration to pre-school screens right round the world. Leading kids and family media and entertainment company UYoung is building a strong track record of co-developing world-class animation content which appeals to both Chinese and international markets.

Award-winning author Rachel Bright’s “Love Monster” series, published by HarperCollins Children’s Books has proved popular with children and parents alike and is a No. 1 bestselling pre-school book. The wonderfully warm and witty books feature the adventures of the only monster in town as he navigates the challenges involved in being a bit funny looking in a world of cute fluffy things.

The TV adaptation is a quirky, animated preschool series full of heart and “big life” learnings for little ones. Showcasing the importance of kindness, empathy, connection and instinct, the colorful and funny adventures follow hairy, googly eyed hero Love Monster as he searches for the right thing to do in a world in which he is one of a kind. With a lot of help from his friends -- a host of vivid and engaging characters -- and a little serendipity, Love Monster learns to follow his heart rather than his slightly “over-thinky” head while building his inner confidence. By watching his adventures, the young audience at home can also learn to cope with difficult emotions.

“We are very excited to enter our first co-production with both the U.K. and China,” said Jon Rutherford, Managing Director of Boat Rocker Studios. “This is the first collaboration to come through our new offices in Hong Kong and London and forms part of our strategy to grow our footprint in Asia, in addition to solidifying our existing partnership with the BBC. We’re thrilled to unveil Love Monster to the global marketplace.”

“We are delighted to be embarking on our first-ever co-production with the BBC and Boat Rocker,” UYoung president Lisa Zhong said. “The deal is even more significant as it is also the first-ever UK/China animated co-production. UYoung is always keen to establish stronger ties with international producers and broadcasters to extend its international reach. And with this inaugural co-production approval from CNRTA, gained as a result of our high standards and prestigious position in the Chinese market, we will be able to fully maximize its broadcasting exposure to the benefit of all parties.”

“Rachel’s warm and witty books will translate perfectly into a series for our youngest viewers,” commented Cheryl Taylor, BBC Children’s head of content. “CBeebies celebrates inclusive behavior and Love Monster embodies a sense of collaboration. We are delighted to be working with Boat Rocker and UYoung bringing a truly international collaboration to pre-school screens right round the world.”

“I’m thrilled that ‘Love Monster’ is leaping from the page to the screen and delighted that it will be the result of a truly international collaboration,” Rachel Bright said. “Love Monster himself found love by venturing out into the wider world and I hope the TV version will too.”

Love Monster will be executive produced by Tony Reed for the BBC, Chapman Maddox for Boat Rocker and James Chen Gu for UYoung. The U.K. share of the animation for the series will be produced by Karrot Animation and A Productions, while a proportion of pre-production on scripts, storyboards and design will be provided by UYoung’s studio in China. Boat Rocker Rights will distribute the series and manage the global brand and licensing, excluding China and South East Asia which will be managed by UYoung.