Nickelodeon gets into the holiday spirit with a Chanukah-themed episode premiering November 26; On November 19, network partners with Save the Children non-profit for ‘Blue Friday,’ a day of giving and learning. 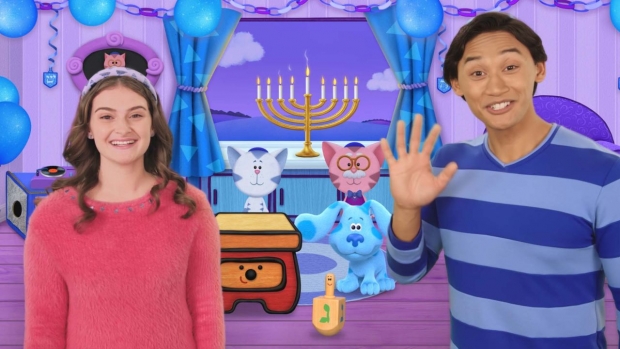 In “A Blue’s Clues Festival of Lights,” a special, surprise guest comes to Periwinkle’s house to celebrate Chanukah, the very joyful, festival of lights. Josh and Blue play Blue’s Clues to figure out who the surprise guest is, and celebrate the holiday by spinning dreidels, frying latkes, and singing an original Chanukah song. The special Chanukah episode joins Nickelodeon’s library of holiday episodes, which includes the iconic perennial Rugrats, “A Rugrats Chanukah,” SpongeBob SquarePants “It’s A SpongeBob Christmas!” and PAW Patrol “Pups Save Christmas.”

In addition, November 19 marks Nick’s annual “Blue Friday,” a day of giving and learning in partnership with international nonprofit Save the Children. In an expansion of Nickelodeon’s partnership with the organization, a national leader in helping children prepare for and succeed in school across rural America, Save the Children will be Nick’s prosocial partner for its second annual “Blue Friday.”

Nickelodeon has made a donation to Save the Children to support early learning opportunities for kids in need, and through Blue’s Clues & You!, continues to help the nonprofit provide learning opportunities and education materials to kids and families in the U.S. with its early childhood education programs. The educational hub, cluedintolearning.com, has resources for parents including learning materials, math, and science curriculum videos, and Blue’s Clues & You! activity sheets. Across America and around the world, Save the Children gives children a healthy start in life, the opportunity to learn and protection from harm. For over 100 years, the nonprofit has been committed to addressing children’s unique and unmet needs, working to ensure they thrive as learners and in life. Later this month, the Blue’s Clues & You! float will return to this year’s 95th Annual Macy’s Thanksgiving Day Parade. The series’ star Josh Dela Cruz and former Blue’s Clues hosts, Donovan Patton and Steve Burns, will perform “You Can’t Spell Blue without YOU” on the float alongside a 22-foot-tall Blue covered in 13 pounds of glitter, on Thursday, November 25, in the TV presentation.

Following the linear premiere of “A Blue’s Clues Festival of Lights,” the episode will be available to watch on Nick Jr. On Demand, NickJr.com and the Nick Jr. App. The episode is part of Nickelodeon’s “Nickmas” holiday-themed lineup which features premieres and specials from the network’s animation, live-action, and preschool series including all-new episodes of hit series Danger Force, That Girl Lay Lay, and Baby Shark’s Big Show!, plus classic fan-favorite holiday episodes of Rugrats, PAW Patrol, SpongeBob