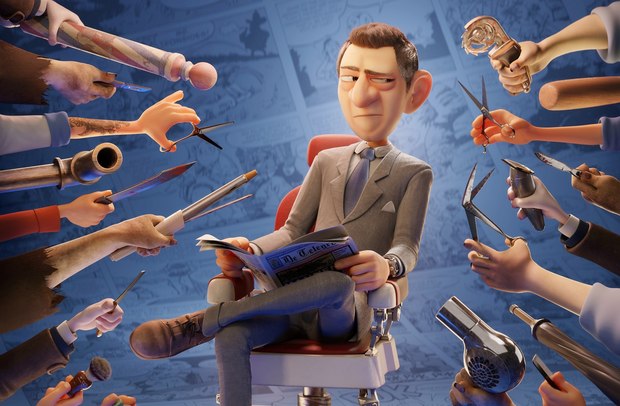 AMSTERDAM, NETHERLANDS -- Blender Institute has released three-minute animated short Agent 327: Operation Barbershop as a proof of concept for what could eventually be the first major international animated feature created entirely in open-source software. Agent 327 is based on Dutch artist Martin Lodewijk’s cult comics, and is co-directed by former Pixar artist Colin Levy.

Since its foundation in 2007, Blender Institute has created eight acclaimed animated and visual effects shorts, culminating in 2015’s Cosmos Laundromat, winner of the Jury Prize at the SIGGRAPH Computer Animation Festival. Each "open movie" was created entirely in open-source tools -- including 3D graphics software Blender, development of which is overseen by the Institute’s sister organization, the Blender Foundation.

Assets from the films are released to the public under a Creative Commons license, most recently via Blender Cloud, the Institute’s crowdfunding platform, which was used to raise the €300,000 budget for Agent 327: Operation Barbershop.

“Agent 327 is the Netherlands’ answer to James Bond,” said producer Ton Roosendaal, original creator of the Blender 3D software. “He’s fighting international supervillains, but the underfunded Dutch secret service agency doesn’t have the resources of MI6. Rather than multi-million-dollar gadgets, he has to rely on his own resourcefulness to get things done -- and in the end, he always pulls it off. To me, that also reflects the spirit of Blender itself.”

Created by a core team of 10 artists and developers over the course of a year, Operation Barbershop sees Agent 327 go undercover to uncover a secret criminal lair. Confronted by the barbershop’s strangely sinister owner, Agent 327 becomes embroiled in a life-or-death struggle -- only to confront an even more deadly peril in the shop’s hidden basement.

“Agent 327 doesn’t fit the American design template for animated characters,” says Blender Institute pipeline TD Francesco Siddi. “He has a gigantic nose, gigantic ears, and bags under his eyes. How many Disney movies do you see with characters like that?”

The Institute’s modeling and design artists, led by Blender veteran Andy Goralczyk, carried out a series of look development tests. Concept designs were created in open-source 2D painting software Krita, while test models were created in Blender itself and textured in GIMP.

Although richly detailed, Operation Barbershop is not a conventional animated short, but a proof of concept designed to introduce Agent 327’s universe and leave viewers wanting more. To achieve the right mix of narrative and exposition, Colin Levy and co-director and lead animator Hjalti Hjálmarsson mixed animated storyboards, live action, and 3D previs during development.

As with all of the Institute’s open movies, technical development on the project feeds back into public builds of Blender. In the case of Operation Barbershop, work was done on Cycles, the software’s render engine, which now renders scenes with hair and motion blur 10 times faster. The new version was rolled out in Blender 2.78b in February. Work on Blender’s dependency graph, which controls the way a character rig acts upon the geometry of the model, will follow in the upcoming Blender 2.8. “For users, it’s going to mean much better performance, enabling much more complex animation set-ups than are possible now,” says Siddi.

For the Agent 327 movie itself, the Blender Institute is establishing Blender Animation Studio, a separate department devoted to feature animation, for which it aims to recruit a team of 80 artists and developers from its international network. To help raise the film’s proposed €14 million budget, the Institute has signed with talent agency WME. Speaking of their ambitions, Blender founder and producer Ton Roosendaal said: “We’ve proved that Blender can create stunning short films. Now we aim to create stunning features, while building and sharing a free software production pipeline.”

Agent 327 wouldn't be the first feature to be created in Blender -- a distinction that belongs to 2010 Argentinean animated comedy Plumíferos -- but the Blender Institute hopes it will be the largest and most ambitious so far, ultimately revolutionizing feature animation.

“As an independent studio, we’re in the unique position of being in complete control of the tools we use in production,” says Roosendaal. “That’s a luxury enjoyed only by the world’s largest animation facilities. We intend to create movies that redefine the concept of independent animated feature production.”