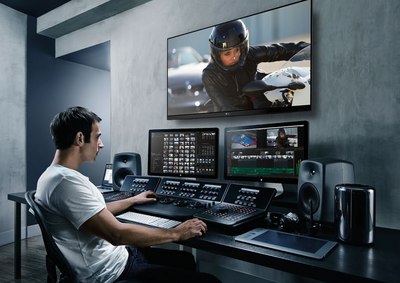 Amsterdam, Netherlands -- Blackmagic Design has announced DaVinci Resolve 11.1, a major new update based on customer feedback that includes dozens of features and improvements that professional editors and colorists have been asking for. DaVinci Resolve 11.1 is available for free download now for all existing DaVinci Resolve customers.

DaVinci Resolve 11.1 will be demonstrated on the Blackmagic Design IBC 2014 booth in Hall 7, Stand H20.

Editing enhancements in the new DaVinci Resolve 11.1 are designed to help editors work even faster than before. Resolve 11.1 includes improved asymmetric trimming, a new Swap Edit command, the ability to trim gaps in the timeline, editable in/out points in the source viewer, graphical fade sliders for video opacity, action and title safe overlays, independent track heights, a full screen timeline option, the ability to add transitions to multiple clips at the same time, and more.

“DaVinci Resolve 11 was a huge release for us and we have been surprised by the incredible rate of upgrades,” said Grant Petty, CEO, Blackmagic Design. “It has been the fastest downloaded product update we have ever had. We’re committed to the community and are continuing to make Resolve even better. Feedback has been overwhelmingly positive, and has encouraged us to work even harder to add as many customer feature requests as we can to the 11.1 update.”

DaVinci Resolve 11.1 is available now as a public beta from the Blackmagic Design web site and will ship as a free update for all current DaVinci Resolve customers by the end of September, 2014.