Blacklist Directors WIZZ Tell It Like It Is for NatureSweet

Blacklist’s Directors WIZZ partners with The Richards Group on the spot Stop the Abuse for NatureSweet, a look at the sad truth of what it’s like to be a tomato in today’s America. 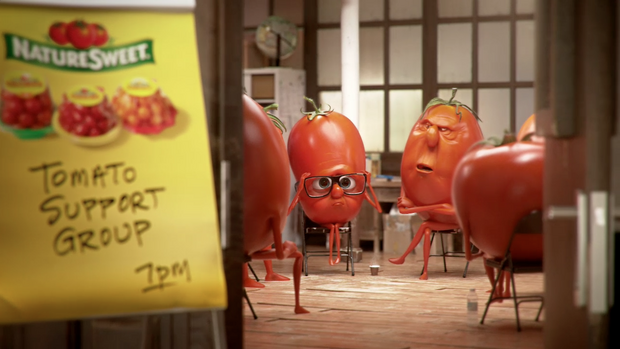 In this charming animated spot, Blacklist Directors WIZZ came together with The Richards Group to explore the sad truth of what it’s like to be a tomato in today’s America. That is, if you’re not a NatureSweet brand tomato. The spot, titled Stop the Abuse, features a psychologically scarred assortment of tomatoes in a group therapy session, sharing their horror stories of being squeezed, prodded, and poked. The scene is ripe with emotion.

“The Richards Group provided us with a solid script that we were excited about from the first read through,” commented WIZZ Producer Matthieu Poirier. “We had the pleasure of personifying the characters as tomatoes and defining their story through relatable personalities and emotions.”

WIZZ developed a proprietary animation process and pipeline to create realistic facial expressions and performances for the tomato characters.

“We worked meticulously to strike the perfect balance between the textures and shapes of real tomatoes while still giving the CG actors human features,” continued Poirier.

To further enhance the reality of the character animation, the WIZZ team captured the voice actors’ performances on video during the recording session, so that they could later use their actual facial expressions as reference for the tomato characters.

WIZZ worked very closely with the agency throughout the production and there is already talk of a possible sequel. “We felt a real enthusiasm from the agency and the client on this project,” said Poirier. "It was a very positive collaboration, a great experience for us all around."

The WIZZ team used 3dsMax to animate the tomatoes.  Photoshop, Mudbox and V-ray were used to render the realistic textures and all compositing was completed in After Effects.