Spin-off series from the hilarious world of Harvey Birdman, Attorney at Law follows a CEO Superhero trying to right the wrongs of her not so ‘green’ family business; new half-hour comedy series premieres April 4. 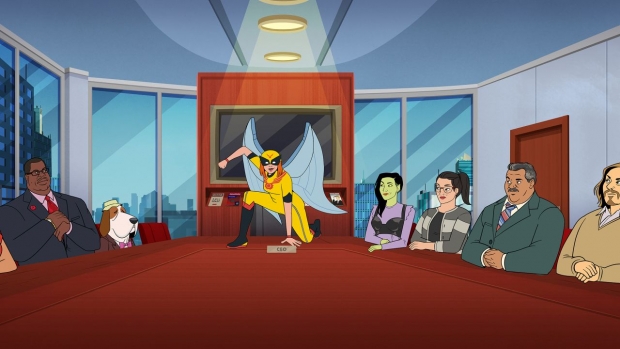 From the world of Harvey Birdman, Attorney at Law comes the new animated spin-off Birdgirl. The half-hour comedy series kicks off on Adult Swim on April 4 – at midnight. The show centers around former company head Phil Ken Sebben’s daughter, Judy Ken Sebben, aka Birdgirl, and her misfit crime-fighting clan.

In the show, 30-something Judy Ken Sebben inherits her father’s company, which would be great if that company weren’t built around the most socially irresponsible 20th Century products and practices that, on a good day, involves clearing redwood forests or operating for-profit children’s hospitals. From the halls of the company headquarters, she assembles the ragtag, non-overtime earning Birdteam.

Together, they spend their nights trying to undo all the luridly dangerous decisions of the generation before or contain the havoc of one of their own “world-saving” products gone bad. By...mid-afternoon, they usually end up having to break a lot of things to stop something bad that one of them may have helped cause.