Comedy shorts for adults is the Canadian company’s inaugural production. 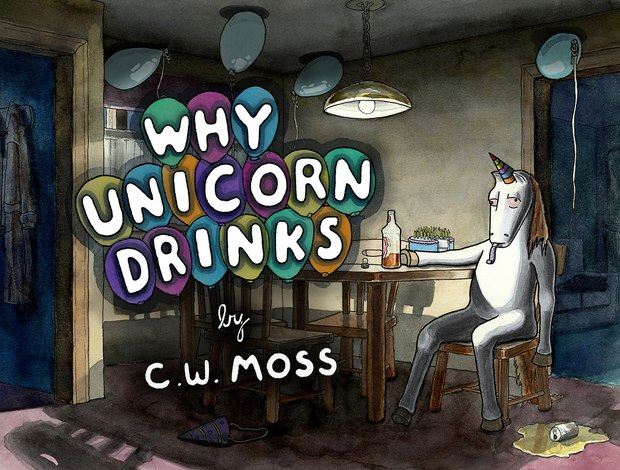 With a combined 30 years of experience in television and film, Binge Bros. partners Scott Winlaw and Craig George were drawn to the dark humor of Moss’ books, and pursued Unicorn as the inaugural property for their production house.

“At Binge Bros., our main focus is producing comedy directed at adults, and C.W.’s books not only offered the mass appeal we were looking for in a property, but ideally provided us with the kind of offbeat and twisted humor our company wants to produce,” said Winlaw.

Binge Bros. is developing a series of streaming, animated shorts inspired by the individual panels of Moss’ second book, Why Unicorn Drinks. The shorts portray Unicorn’s sad reality of life as a mythical creature, and reveal what drives the Unicorn to the bottle. Each short, ranging from two to five minutes in length, will give broadcasters the option to package the content as individual shorts, or to combine them into more traditional episode lengths.

“We made the decision to create shorts from the start,” says George. “It allowed us to be creative with the series, so we won’t be confined by a traditional format. As well, in a multi-platform world, it allows broadcasters to be creative with how they package it. In other words, Mr. Unicorn is no one-trick pony.”

The Binge Bros. own self-admitted twisted, comedic sensibilities were a perfect match for Moss, the American author and illustrator of the single-panel cartoons chronicling the trials and tribulations of a fantastical, but irreverent, unicorn trying to exist in an all-too real world.

“Unicorn always felt a little too monogamous for me,” said Moss. “Scott and Craig, from the get-go, seemed like the perfect people to have a public four-way. Their own ideas and thoughts on what Unicorn is and can be felt akin to my own. As this thing develops, I’m excited to learn how depraved Scott and Craig can become. Moving Unicorn from books to motion feels right, and I think the world is ready for his magic.”

Moss will collaborate with Binge Bros. Productions as an executive producer on the series.