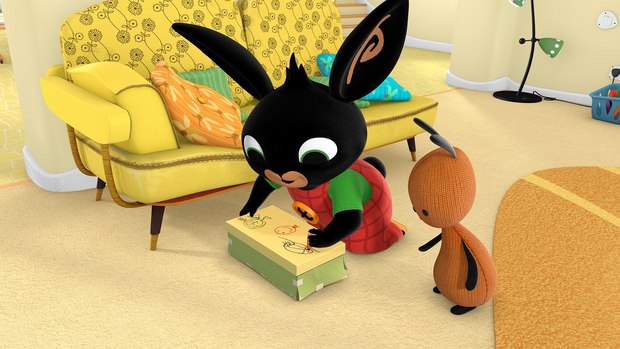 LONDON -- Independent studio Acamar Films has won a prestigious accolade from the Writer’s Guild of Great Britain for its hit preschool series Bing, claiming the coveted title of Best Writing in a Children’s Television Episode for Bing “Bye Bye.” The lead writer for this episode was Denise Cassar and team writers were Acamar’s Lucy Murphy and Mikael Shields and also Ted Dewan -- author/creator of the Bing character.

This latest recognition from the industry, following Bing’s recent BAFTA nomination and highlights the show’s editorial accomplishment and its unique appeal and resonance with an ever-growing audience of both pre-school children and the grown-ups in their lives.

“Team writing is an unusual route to decide to take for a pre-school series,” commented Lucy Murphy, Executive Producer and leader of the Bing writing team for Acamar Films. “It can be a difficult and sometimes arduous process but we were blessed with a skilled and passionate team of 23 wonderful writers and we found the results to be gratifying and worth the extra effort. Huge congratulations to Denise Cassar, the lead writer of this award-winning episode and to our Bing writing team. It is unusual for a preschool project to win this prestigious award so thank you also to the Writer’s Guild of Great Britain for honoring our work.”

The Writer’s Guild award crowns an incredible first year for Bing with a strengthening group of prestigious commercial partners now supporting Acamar on the project, and with ratings’ winning broadcast launches on CBeebies and ABC Australia. Bing now looks set to become an enduring success with its audience in the international market both on-screen and off-screen.

Acamar Films has announced global broadcast deals for Bing in partnership with Aardman and there is now a growing licensing programme in place for 2015 and beyond with toys, books and further products launching at retail.

Celebrating the noisy, joyful, messy reality of everyday life when you’re a preschooler, Bing stories are small but they are full of drama; micro-dramas depicting everyday events that all young children and the grown-ups in their lives will recognize. Just when Bing thinks he’s got the hang of life, it can swing right back and knock him over. But it’s okay -- as Bing’s companion and caretaker Flop says, “Never mind Bing, it’s no big thing!”