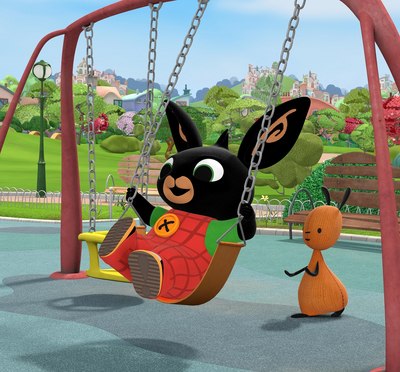 London, UK -- Acamar Films’ award-winning preschool series Bing is set to significantly expand its UK audience through a DVD deal signed with StudioCanal Ltd, a subsidiary of the CANAL+Group and one of Europe’s leading distribution companies.

Launching this month, the 70’ DVD will feature some of the best-loved episodes from the first series of CBeebies’ hit show: Swing, Bye Bye, Ducks, Growing, Hide & Seek, Lost, Frog, Bake and Atchoo! VooVoo.

John Rodden General Manager StudioCanal Limited comments, “We are delighted to be working with Acamar and Aardman on bringing this truly exceptional series to a DVD audience in the UK. Bing is an absolute joy, made with incredible creativity and quality.”

Mikael Shields, Producer and Series Voice Director of Bing and CEO of Acamar Films says, "Bing continues to be hugely popular with both preschool children and their families and he has become a part of their daily routine. We know that children love to watch their favourite episodes over and over so we’re thrilled that they will now be able to own their own DVD.”

Alix Wiseman, Head of Sales and Acquisitions at Aardman Animations adds, “We couldn’t be more pleased about signing up StudioCanal as the UK DVD partners for Bing. We already enjoy a strong partnership with Studiocanal both in the UK and abroad and their passion and enthusiasm for this unique show matches ours entirely.”

Produced by independent studio Acamar Films and Dublin-based partners Brown Bag Films, Bing has seen extraordinary success since it launched last year. The series has won a Writer’s Guild Award, a BAFTA nomination for best Pre-School Series and has been a ratings hit on CBeebies in the UK and on ABC in Australia. Bing has topped the animation charts with its first selection of episodes on the UK’s iTunes store and has had a remarkable 22.6 million views since launch on the BBC’s iPlayer in June last year, highlighting the series’ unique appeal and resonance with an ever-growing audience of both pre-school children and the grown ups in their lives.

2015 looks set to be another bumper year as Bing products hit retail for the first time this summer and the show is set to launch to new audiences across the globe with 30 new broadcast territories now under negotiation through Acamar’s global distribution partnership with Aardman.