New HD transfers of ‘Hair High,’ ‘Mutant Aliens,’ and ‘I Married a Strange Person!’ among films Shout! Factory is making available for purchase or rental. 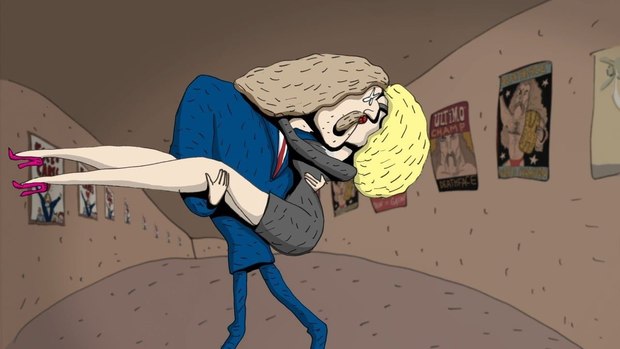 The wait is finally over… digital access to legendary animator Bill Plympton’s feature film library is less than three weeks away, thanks to his new distribution deal with Shout! Factory.

With a unique visual style and subversive sense of humor, often referred to as sick and twisted, but in a good way, award-winning animator Bill Plympton has spent the past thirty years on the forefront of indie animation, creating groundbreaking works that have earned him both a rabid fanbase and international critical acclaim. On October 15th, 2019, Shout! Factory is bringing his feature films to all major digital platforms, including Apple TV, Google Play, and Amazon Video. In addition, Hair High, Mutant Aliens and I Married a Strange Person! feature brand-new HD transfers.

Winner of the recent 2019 Webby Awards’ Best Animated Series for Trump Bites, Plympton has also been honored over the years with the Cannes Film Festival’s Jury Prize and was nominated twice for an Academy Award. He began his career as an illustrator and nationally syndicated cartoonist before making his first animated short, Boomtown, in 1983. Plympton’s work has spanned from commercials and music videos to full-length animated features, as well as the animated shorts which he is best known for.

A low-rent bounty hunter named Rod Rosse, the one-man posse, gets entangled in a web of danger when he takes on a job from an ex-biker/ex-wrestler turned U.S. senator named "Deathface."

When a scheming woman drives a wedge of jealousy into Jake and Ella’s perfect courtship, insecurity and hatred spell out an untimely fate. With only the help of a disgraced magician and his forbidden "soul machine," Ella takes the form of Jake's numerous lovers, desperately fighting through malfunction and deceit as the couple tries to reclaim their destiny.

A morally bankrupt man wakes up one morning to find wings sprouting from his back that make him do good deeds, throwing him unwillingly into a battle for his own soul. Presented by Terry Gilliam.

An outrageous Gothic myth from the 1950s, Hair High is the legend of Cherri and Spud, a teenage couple who are murdered on prom night and left for dead at the bottom of Echo Lake. Exactly one year later, their skeletal remains come back to life and they return to the prom for revenge and their justly deserved crowns. This release features a brand-new HD transfer.

20 Years after astronaut Earl Jensen’s ship was sabotaged and Jensen was left for dead, he returns to Earth to take revenge on the man who was responsible. Backing Jensen up is a ragtag gang of mutant aliens from outer space. Soon these deadly but lovable aliens reveal their secret powers and not even the world’s strongest army can stop them from accomplishing their mission! This release features a brand-new HD transfer.

This high-spirited and sexually charged comedy is about a young husband who gains the power to make his fantasies into reality. The couple has to battle an ambitious TV executive and a slimy Army colonel who want this power for themselves. This release features a brand-new HD transfer.

Del is a songwriter for the obnoxious Mr. Mega, and in love with Didi, Mega's secretary. His quest to write a hit tune brings him to the wacky world of Flooby Nooby, where he just might learn to write songs from the heart.