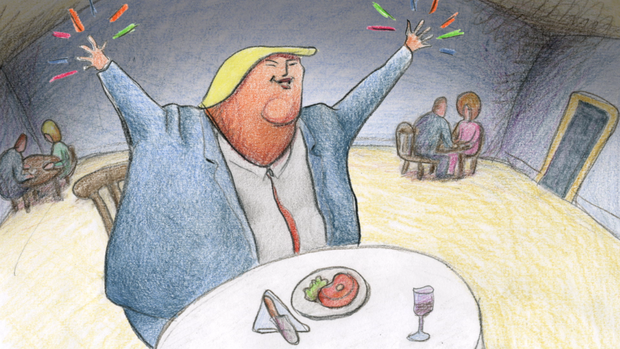 NEW YORK -- Academy Award nominee and Palme D’Or winner Bill Plympton has made more than 50 animated films, but he’s never used his wildly expressive animation for political satire -- until now. Trump Bites is a series of short animated fantasies based on actual Donald Trump audio clips, produced by Billy Shebar and David Roberts of 110th Street Films, and hand-drawn by Plympton. The first three episodes, each approximately one minute in length, had their debut earlier in June on the New York Times web site. The team hopes to keep the series running as long as Trump is president, and have launched a Kickstarter campaign to fund future episodes.

Comedy writers complain that Trump is impossible to satirize because nothing they write can top what he actually says. Trump Bites uses real audio clips as the basis of surreal animations that capture Trump's paranoia, narcissism, and xenophobia. “This president has no censorship in his brain,” Plympton notes. “He says whatever crazy exaggeration or lie serves his purpose in the moment, and most of it is on tape. So I don't think we'll ever run out of material.”

Plympton says the project is oddly similar to his 2005 Oscar-nominated short Guard Dog, in which he got inside the head of a hyper-vigilant dog. “It’s the same thing with Trump Bites,” says Plympton, “I’m going inside his brain and showing his fears, his paranoia -- his craziness.”

Hand-drawn with colored pencils, Plympton’s animation is as outlandish as Trump’s utterances. The episode titled “It’s the bigness of the office…” conjures a tiny Trump welcoming a gargantuan CEO to the Oval Office; “I do have a relationship with him…” imagines Trump and Putin shirtless, riding a unicorn; “I’m a cleanliness freak…” is a paranoid daydream in which Trump is overrun by a horde of ant-sized immigrants. Plympton, who was born the same year as Trump, says it’s his destiny to take on Trump.  “There's something thrilling about doing battle. It’s like you wake up and you’ve got something to live for.”

Serving as Consulting Producers are Adam Rackoff, Evan Shapiro, and Peggy Stern. Rackoff is a frequent Plympton collaborator and co-founder of two production companies; Cinco Dedos Peliculas with actor Matthew Modine (Full Metal Jacket, Stranger Things) and Rackoff/Hancock Animated Productions with James Hancock. Shapiro is an Emmy-nominated producer and former President of Pivot, IFC TV, and the Sundance Channel. Stern is the winner of the 2005 Academy Award for Best Animated Short as producer of John Canemaker’s The Moon and The Son.