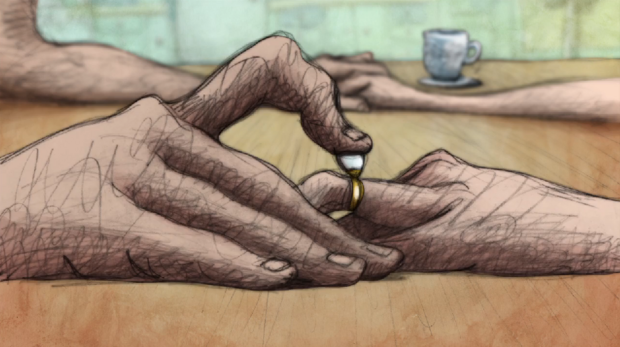 Oscar-winning animator Bill Plympton has announced the New York City premiere of his new feature, Cheatin', which will take place on the closing night of the Friars Club Film Festival, Saturday, April 5, 7:30 pm at the NYIT Auditorium, 1871 Broadway (2 blocks north of Columbus Circle). For more info and tickets, visit http://www.friarsclub.com/filmfestival/.

In a fateful bumper car collision, Jake and Ella meet and become the most loving couple in the long history of Romance. But when a scheming “other” woman drives a wedge of jealousy into their perfect courtship, insecurity and hatred spell out an untimely fate. With only the help of a disgraced magician and his forbidden “soul machine”, Ella takes the form of Jake's numerous lovers, desperately fighting through malfunction and deceit as they try to reclaim their destiny.

You can also see Cheatin' at the following festivals:

In other news, Plympton has finished production on a segment of The Prophet, an animated feature based on the classic book by Kahlil Gibran. The film is being produced by Salma Hayek, and is expected to be released in spring of 2014, with voices provided by Hayek, Liam Neeson, John Krasinski, Alfred Molina, and Frank Langella.  Other segments will be directed by Joan Gratz (Mona Lisa Descending a Staircase) and Nina Paley (Sita Sings the Blues).