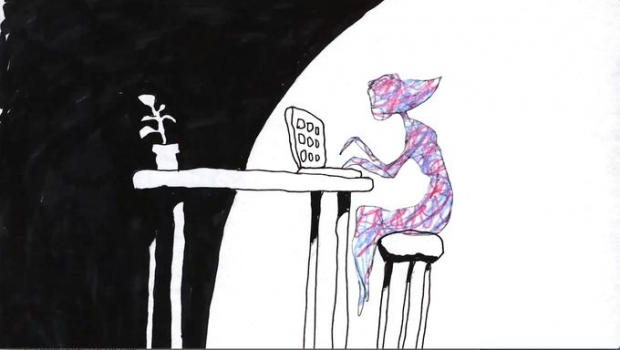 The film, Demi’s Panic, tells the story of Demi, a young Latina professional living in NYC whose nightmares foreshadow the coming storm. She feels the anxiety and panic that we have all collectively experienced during the COVID-19 quarantines. She turns to her boyfriend, Omar, for support, but a safe harbor is hard to find when the world is being buffeted by an unprecedented storm.

Leonard, the film’s writer and producer, contacted Plympton in January, looking for advice on getting his story animated; Plympton signed onto the project, and has been working with him and his co-producer and wife, Lorena Hernández Leonard, on the film. Rock Farm Productions has launched a Kickstarter campaign to fund the production, with some great rewards including original art from the film, contributor names in the credits, even tickets to the Boston premiere of the film and after-party. Please check out the campaign via this link: https://www.kickstarter.com/projects/deminyc/demis-panic

Plympton also shared that work continues on his next animated feature, Slide. The film is half done; updates can be found on the project’s Kickstarter campaign site. He notes, “We've finished mailing out all the hardcover books, and we'll be moving on to the signed art prints very soon. Backers, thank you for your patience!”