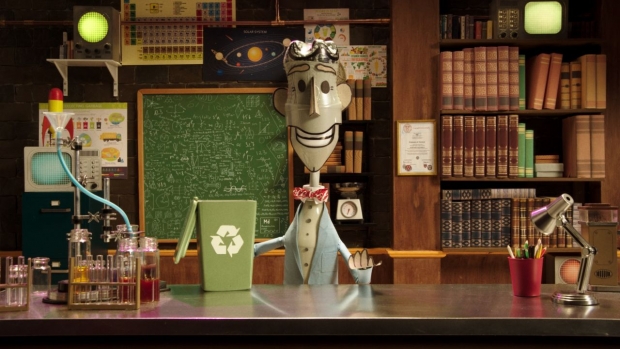 The Coca-Cola Company has released a short film to demystify the often confusing and invisible bottle-to-bottle recycling process. The vividly animated stop-motion piece, The Coca-Cola Company and Bill Nye Demystify Recycling, was produced by Mackinnon & Saunders, the award-winning animators behind Fantastic Mr. Fox and Corpse Bride.

The beverage company teamed up with Bill Nye to illustrate the holistic recycling process breaking down the ins-and-outs of plastic recycling. As Nye narrates the process, viewers are taken on the circular journey of a plastic bottle, starting from the time it’s placed in a recycling bin to it coming back on the shelf as a 100% recycled bottle (excluding cap and label).

Made from recycled Coca-Cola bottles, the “Bill Nye” puppet stands 10 inches tall and uses a range of 10 different mouth shapes to facilitate his lip-synching. Other recycled materials used throughout the film include trees made from green Sprite labels to conveyor belts designed from recycled cardboard. “As we know, we need to reuse plastic,” noted Nye. “That’s why I’m partnering with The Coca-Cola Company to show the science behind the process of recycling and how we can continue to address the global plastic waste crisis, together.”

Check out The Coca-Cola Company and Bill Nye Demystify Recycling:

“We recognize our responsibility to help address the world’s plastic waste crisis and to help create a closed loop economy, but we can’t do it alone,” noted Christine Yeager, Director, Sustainability at The Coca-Cola Company North America. “And who better than Bill Nye to help inspire everyone to understand, think, feel, and behave differently about recycling. Still, there’s much more that needs to be done – which is why we’re also advocating for well-designed collection policy, funding infrastructure, and creating greater economic demand for recycled content. But Step One is collecting and recycling our bottles.”