Showtime taps BigStar to create the title sequence for the nine-part documentary series about the impact of climate change, Years of Living Dangerously. 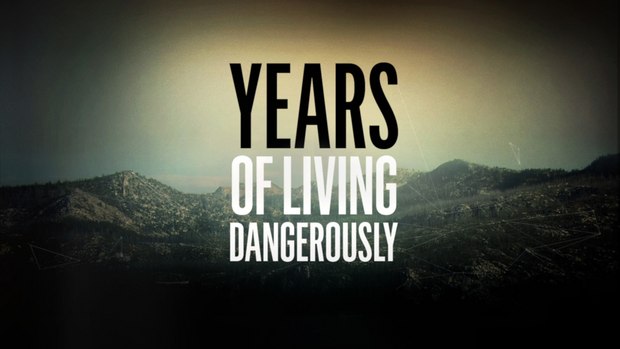 The producers of Showtime’s Years of Living Dangerously recently tapped creative strategy and production company BigStar to create the show open for the nine-part documentary series about the impact of climate change. Featuring celebrity correspondents, including Matt Damon, Jessica Alba, Olivia Munn and Harrison Ford, as well as seasoned journalists, the series tells the story of climate change on three major fronts: the impacts on people, here and now; the dramatic politics surrounding the issue; and the solutions being created to mitigate the problem. Years of Living Dangerously premiered April 13th, and is executive produced by James Cameron, Jerry Weintraub, Arnold Schwarzenegger, Dan Abbasi, Joel Bach and David Gelber.

Working directly with The Years Project, the series’ production company, BigStar was tasked with creating a main title sequence that conveyed the crippling effects of climate change and its broad reach. The challenge was to capture the element of human drama and introduce the 14 correspondents of Years of Living Dangerously. Moreover, it had to represent the scientific backbone and political backdrop through which the series navigates – all under two minutes.

“We gave BigStar a very difficult task: create a main title sequence for a multi-part series on global warming that would showcase the enormous size and scope of the project (and subject) but also have an intimate, human feel,” says Joel Bach, Executive Producer  and Creator of The Years Project. “We also wanted to distinguish ourselves from climate change ‘specials’ that the networks have rolled out periodically over the last several years; Years [of Living Dangerously] had to feel like something altogether new.  And we needed to somehow feature our full cast of celebrity correspondents in action, seeing the places and meeting the people affected by climate change. BigStar delivered -- and in a big way -- creating a powerful series of double exposure and layered images that together told a story and built to an exciting, dramatic finish. I couldn't be happier with the end result -- and am delighted we decided to work with BigStar on the series.  They also did a phenomenal job with the graphic animations inside the show."

BigStar created tension in the titles by showing infographic-laden footage of the correspondents traversing the globe, from California to the North Pole, and from the Andes to Africa. Excerpts from their interviews provide a sobering sonic backdrop that sets the stage for the journalistic journey. The sequence embarks with a cool palette of earthy greens and crisp blues, highlighting open landscapes and natural resources, before slowly warming to dark reds and dusty oranges. The shots then shift to more crowded imagery and frenetic editorial pacing. Each moment and sound byte builds on the next until the sequence crescendos into an explosive, dramatic title reveal.

“At BigStar, we have a strong desire to use our talents for the greater good, which is why we love getting involved in projects such as this one,” says BigStar founder and executive creative director Josh Norton. “From the outset, we understood the gravity of this story and how imperative it is to the future of humanity. With a project of this importance and social purpose, you really have to dig into the heart first.” When BigStar first met with the series creators Joel Bach and David Gelber about the project, Norton says he knew his team could do a great creative opening, especially given the opportunity to reunite with longtime collaborators Adam Bolt and Jennifer Latham, who are senior producer and supervising producer of the series, respectively.

“It really helps to have a strong rapport with the people who you’ll be creating with for several months, as was the case with this ambitious project,” says Norton. “Adam and Jennifer are both amazing, and it was a great opportunity for us to work together again.”

“This is the third project I’ve done with BigStar,” adds Bolt. “Lots of graphics companies can blow you away with special effects. But not all of them understand how to use graphics to tell a story or how to take complex information and turn it into something that’s both exciting and easy to digest. Josh [Norton] and Regina [Sobel] -- and the entire Big Star team -- did a phenomenal job."

The title sequence was a lesson in the creative process between the graphics-minded team at BigStar and the storytellers at The Years Project who come from an editorial background. Ultimately, Norton says, the collaboration yielded the strongest story possible.

“We were dealing with hundreds of hours of footage from around the world, so it was great to have their editorial input selecting the best shots,” says Norton. “We didn’t want to get too precious with any one scene. There’s a visceral rawness to the title sequence, and it works.”

For each episode, BigStar also created in-show graphics and complex maps to express some of the more technical scientific details behind climate change. “It’s important that the series sticks to the science and doesn’t sensationalize anything,” concludes Norton. “There’s just so much data about what’s happening to our planet, and a big part of our role was to make that information clear and simple to understand.”

BigStar used a range of different techniques and plugins, including Maya for modeling, Plexus for mesh-like effects, After Effects for animating and compositing, and Syntheyes for tracking.

Music was scored by Thomas Newman.