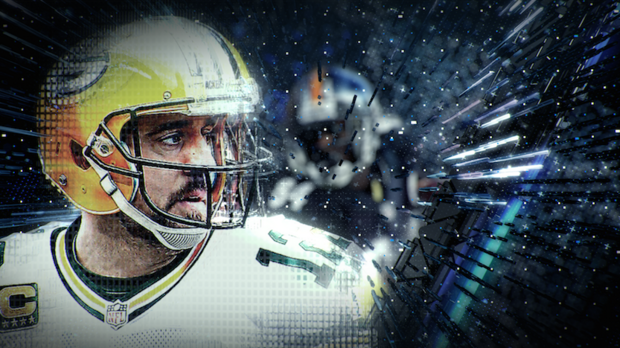 The heightened energy and adrenalized pace of the new graphics are intended to build excitement and anticipation for MNF viewers. They bring the in-arena experience to an audience that increasingly lives through screens, yet has a high level of expectation from their IRL experiences with spectacular rock concerts and extravagantly staged shows.

While the ESPN rebrand informs every element of the graphics, the creative team drove an evolutionary approach for MNF’s own distinct identity. Every element (more than 100, complete with tool kits) has a reason to be there and ties back to the DNA of the ESPN identity, down to the shifting planes of action which mimic the stacked video screens that are impressively arrayed in ESPN’s 9,000 square foot NFL studio. Projection mapping onto the sleek LED-lit panels create a double exposure effect that transcends space and makes players appear larger than life.

The package features the intense luminosity of arena concert lighting displays and saturated tones of black, red, blue and white, echoing the colors of the reimagined MNF logo, now with a more modern and abstract appearance. It was important to both ESPN and Big Block to retain the equity of the well-known logo, but also infuse it with a new aesthetic to elevate the brand.

The 2015 season of Monday Night Football reveals other innovations from ESPN, including a full 16:9 frame for its NFL insert graphics, which allowed Big Block greater latitude to design more freely. ESPN’s intuitive new score bug disappears during certain plays, opening up the screen during gameplay. A new goal-line camera provides a unique viewpoint of the game and has been described by the media as “the coolest innovation in football in years.”

The combined ESPN and Big Block creative teams met twice a week to challenge and collaborate with each other. Taking cues from Jay Rothman, ESPN Monday Night Football producer as well as ESPN’s Vice President of Production, and Chip Dean, ESPN Monday Night Football director, who are experts in staging with years of live broadcast experience, the group strove to push all parameters to recreate the drama and production values of a supercharged stage show. Production on the MNF graphics package began on March 1 and delivered on August 1, transforming traditional broadcast formats for new digital screens and realizing ESPN’s desire to set a precedent for all sports network branding with a highly sophisticated, premium channel identity.

Kenny Solomon, managing director of Big Block, said, “Thank you to our friends at ESPN for entrusting us with the Monday Night Football brand.  We were lucky to have Spike and Lucas as our creative partners. And kudos to Curtis, our entire Big Block design team and our ESPN creative partners Spike, Lucas and Jay. They really nailed it!”