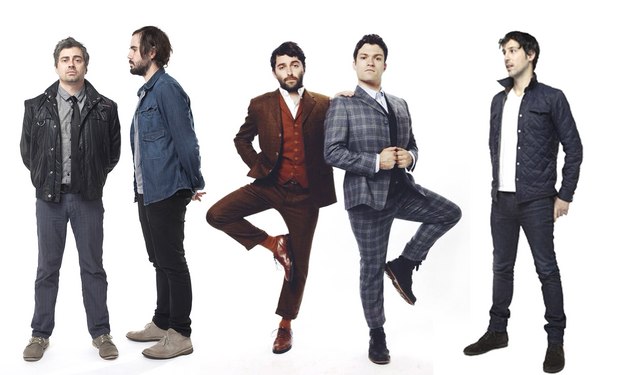 New York, NY -- Big Block Live has announced its first directorial roster, signing directors Josh + Vince, GHOST+COW and Joe Sabia for exclusive representation in North America. Collectively, these are writer/directors who create integrated campaigns across all platforms, who know how to build and captivate audiences and who understand the importance of distribution and destination to story.

Mary Crosse, executive producer at Big Block Live, said, “As we expand our roster of pop culture creators and artful directors, Josh + Vince, GHOST+COW and Joe Sabia are a perfect fit for us. We see ourselves as a creative conceptual group with an entire entertainment and production division as an additional asset for agencies and clients. And we’d like to be the ultimate playground for directors.”

Josh Ruben and Vincent Peone, the award-winning directing duo known as Josh + Vince, began their careers pioneering comedic viral videos over twelve years ago. The shorts films, commercials and music videos they have written, directed, shot and produced have amassed a combined total viewership of well over two billion.

Their series of CollegeHumor videos for Vitaminwater, “Subway Panhandler Pranks Entire Subway Car” and “GPS Prank,” has been covered by The Today Show and Good Morning America as well as TIME, Perez Hilton and MSNBC News. The Huffington Post named their subway prank as one of "7 Native Content Campaigns That Rocked 2013.”

Josh + Vince recently directed Strong Island, one of the first comedy series to emerge from CC Studios, Comedy Central’s digital platform, and a commercial for Vonage and Animal Planet’s “Finding Bigfoot” series. The duo is currently in development for Toll Booth, their first feature film with Big Block Entertainment, which begins principal shooting in summer of 2014.

“Getting our start on the web has taught us the value of a modern approach to commercials, branded content and features,” said Ruben and Peone. ”Big Block's trajectory is perfectly in line with our sensibilities. We're very pleased to call them our new home.”

GHOST+COW is the Brooklyn, NY-based directing duo comprised of Brandon LaGanke and John Carlucci. LaGanke and Carlucci have worked extensively in advertising, as well as on the production company, music label and art scene in New York City.

Joe Sabia is a New York City-based digital artist and storyteller who conceives, directs and executes multi-platform campaigns. In 2011, he received a YouTube grant to launch the music channel CDZA, which grew to 23 million views with 240,000 subscribers. CDZA subsequently went on tour for Google, opening for such acts as Macklemore and Snoop Lion. In 2013, Sabia directed a CDZA set at the first annual YouTube Music Awards, working alongside noted directors Spike Jonze and Chris Milk. BBDO and AT&T hired Sabia and CDZA to write, perform and produce 520 unique songs in only two days, with videos posted to YouTube within minutes of each performance.

Sabia’s 2011 TED.com talk on “The Technology of Storytelling” has over one million views and has made him a highly requested speaker on the subject of creativity and culture all around the world. He has been the co-host of Boing Boing TV on Virgin America flights and was chosen by Vanity Fair as one of 10 directors to create a commercial for their Centennial “Decades Series.”

Sabia has worked directly with companies like Google, Interscope Records, BBC America and AT&T. At the age of 22, he was hired to launch HBO’s first digital lab and when he was 24, NewsCorp acquired his gaming company “Sexy Politics,” which was the first live-time interactive strip quiz on the Internet, educating the public on the 2008 presidential election.

The new roster joins director Gavin Bowden who was signed for representation by Santa Monica-based Big Block in January 2013. Bowden is known for his stunning integration of live action storytelling and VFX in an array of commercial campaigns for Toyota, GMC, Chevy, Nike, Target and 7UP for such agencies as JWT, Saatchi LA and NY, TBWA and Weiden+Kennedy.  He recently directed “Around” for the Texas Lottery, which was produced by Big Block for Austin-based agency LatinWorks.