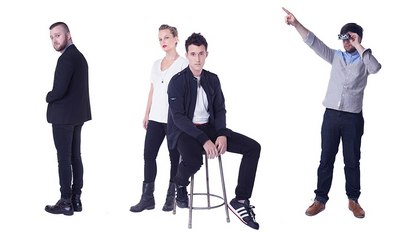 Paul Trillo, John Poliquin and B&W, along with Big Block Live directors Josh + Vince, GHOST+COW and Joe Sabia, are all new media storytellers who thrive in in a collaborative culture and whose impact on advertising, social cause and music video genres provides unlimited opportunity for innovative brand integration.

Paul Trillo is a New York-based filmmaker who was recently named Director to Watch after his short film A Truncated History of Infinity was screened at the 30 Under 30 Film Festival. Trillo has also been shortlisted for the D&AD 2015 Next Director Awards. His constant pursuit to develop and explore new techniques has led to a unique body of work and his interest in experimentation, illustration and design permeates his highly imaginative and original style.

Trillo’s highly art-directed storytelling can be seen in his commercials for Microsoft Living Moments, Prius SF in an Uber and Nokia NY 41x41; music videos Sarh U and I, The Peach Kings Be Around, The Peach Kings Lonely and Teebs Moments; and his short films A Truncated History of Infinity, Salience and How to Fly a Kite.

“It was important to me to be on a roster with other directors that I admire,” Trillo said. “I am also impressed with the scope of Big Block as a company, which has production entities in commercials, film, television and theater. This provides a unique perspective and greater opportunities for clients and directors.”

“There is an impressive wave of intuitive filmmakers at Big Block Live and the company has a collective culture at its core, a formula that perfectly fits the current advertising climate,” Poliquin stated. “I wanted to be a part of it. I want to produce content that creates a buzz and Big Block Live is producing exciting work with high production values in both traditional and innovative formats.”

Brooklyn-based Michael Bozzo and Justine Warwick are the award-winning directing/shooting/editing team known as B&W. Known for their emotionally-driven storytelling and especially for working with real people -- non-actors -- in authentic, unscripted stories, B&W creates cinematic and highly visual films. Together the duo writes and directs, shoots and edits, lending their unique vision to commercials, sports documentaries, promos and branded content for brands such as Red Bull, The History Channel, David Yurman, NBC and Sports Illustrated.

Bozzo is a sought after cinematographer known for his evocative imagery. As a professional director of photography, he has travelled the globe to some of the most grueling and remote locations on earth. Warwick cultivated her command of visual storytelling in the cutting room. Her artistry runs the gamut, having lent her skills to Hollywood feature films, sports features, and commercials.

“In our work we are always taking risks and exploring new ideas,” Bozzo and Warwick said. “We are thrilled to be joining a team that is equally excited about stirring things up.”

Mary Crosse, executive producer at Big Block Live, said, “I am so honored to expand our creative collective with these new directors. They each share in the spirit of what makes our group unique, with a strong sense of style, a passion for storytelling and an innate understanding of new media. Individually, their talents round out our roster, with John’s expertise in beauty and fashion, B&W’s stylized sports documentary and Paul’s technical experimentation and thoughtful, art directed storytelling.”

Big Block Live has also retained new representation on the East Coast through Miss Smith and on the West Coast through Devine Reps. “Miss Smith has a fantastic reputation for working with high quality companies on the East Coast and we are proud to be their non-union offering to clients,” Crosse noted. “Devine Reps, located in San Francisco, is perfectly located to represent our talent to West Coast digital agencies for web video content.”

Big Block Live is represented in the Midwest by KK Reps, in Canada by Hesty Reps and for networks by The Ashy Agency.