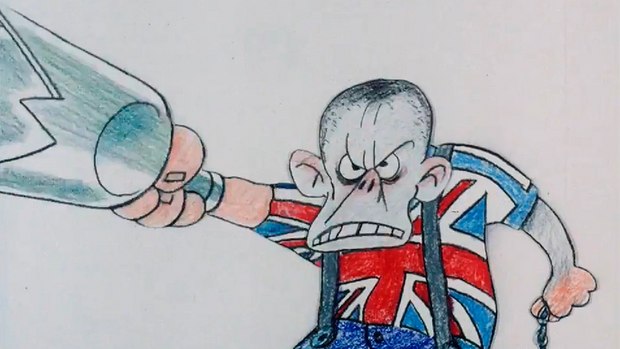 Bob Godfrey's 'The United Kingdom' is one of the homegrown films featured in the BFI's Animated Britain program.

LONDON -- A part of year-long focus on animation -- and coinciding with the release of Early Man, Nick Park’s latest animated feature for Aardman and Studiocanal -- the British Film Institute has revealed new access to unprecedented collections of archive animation, both online and in cinemas.

Drawn from both the BFI National Archive and Regional and National Film Archive Partners across the U.K., Animated Britain is a free online collection of more than 300 films, surveying a rich century-long history of British animation.

From the earliest pioneers and the birth of British animation with Latest News’ animated titles in 1904, to some of the best-known, award-winning names in commercial and independent animation, including works by Halas & Batchelor, Bob Godfrey, George Dunning, Cosgrove Hall and Larkins Studio, this landmark collection highlights the extraordinary creative variety in domestic production across the U.K.

Providing a wider framework to trace this new history of British animation on the big screen, Archive Remasters is a complementary three-part cinema program of 35 newly remastered classic animations drawn from the BFI National Archive’s animation collection. Ranging from 1909 to 1993, these curated packages present key works alongside unexpected surprises of little known or rarely seen early examples of British animation. Archive Remasters will preview at BFI Southbank Feb. 20, March 1 and March 4, presented by BFI Animation Curator Jez Stewart. The packages will be available for U.K.-wide cinema bookings from April.

Animated Britain is presented as part of Unlocking Film Heritage with thanks to National Lottery funding and the support of the Esmée Fairbairn Foundation. International audiences can also explore a selection of these films via a playlist on the BFI’s YouTube channel.

A free exhibition from the BFI National Archive Special Collection, British Animation goes on display at BFI Southbank’s Mezzanine Gallery from Jan. 26 to April 8, showcasing the artwork and industry behind some of British animation’s most enduring classics including materials from Britain’s first animated feature Animal Farm, the pioneering work of Lotte Reiniger, Yellow Submarine director George Dunning and Captain Pugwash creator John Ryan. In addition, the recently relaunched Mediatheque at BFI Southbank has expanded its popular animation collection for viewers to explore in venue.