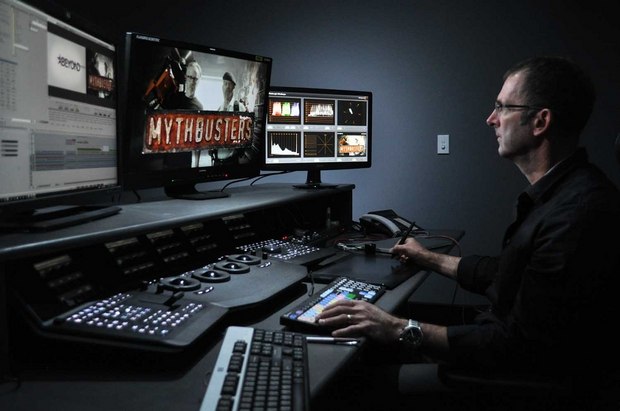 Beginning with August’s “MythBusters vs. Jaws” episode, Beyond is delivering VR experiences to accompany upcoming episodes throughout the rest of the season, including mail truck explosions, a zombie attack and a rocket launch, among others. The VR content is available via Discovery’s VR smartphone apps for iOS and Android, as well as on a new dedicated Discovery VR website.

“We had been doing our own research into VR and found that Discovery was also doing their own R&D, and they were keen to get content,” said Anthony Toy, Director of Post Production, Beyond Productions.

“The first thing we filmed was underwater shark footage,” said Ambar Sidhwani, Junior Editor and Virtual Reality Editor at MythBusters. “But regardless of where we shoot the footage, we either use a six or seven camera rig, shoot static or point-of-view, 360 by 180 degrees field of view, 4:3 aspect ratio and at 80fps, which helps us sync the footage later in post.”

Once the footage is brought into post, it is run through stitching software for syncing, calibration, stabilization and exposure compensation.

“It’s like putting a puzzle together of which camera angle goes where to make a canvas,” Toy explained. “The end result is 4096 x 2048 MP4 file, 4K, 2:1 aspect ratio, 80fps. High resolution and high frame rate are very important for VR, and we found that many post systems couldn't handle resolution or did weird things to the frame rate. Luckily for us, our senior online editor Michael Graham suggested DaVinci Resolve Studio.”

“Resolve being resolution independent was a must as the frame size of the final stitched image does not conform to any conventional formats such as HD, 2K, 4K, UHD, etc.,” Graham said. “To have the flexibility to work in the native resolution of the stitched image meant no blanking was introduced to the final output, which would affect the way the image wraps around to create the VR 360 degree image.”

“Resolve’s biggest advantage is that it deals with aspect ratio and frame rate natively,” Sidhwani added. “There is no encoding files to other files with different frame rates. 80 fps is great up to delivery, but the final platforms, such as phones, won’t play 80p materials, so the final file is delivered in 30p. Resolve does frame to frame conversions and makes file longer, so the motions in the footage are smooth at the end of that conversion process.”

According to Sidhwani, this is essential in the virtual world, as people can get sick from sudden jerks. “The smooth motion helps makes the VR experience more immersive and does not make people motion sick, which is key to the experience,” he commented.

DaVinci Resolve Studio is also used to grade the footage, and as Toy noted, grading is done on a computer monitor. “We don't get video output at that resolution because it’s not a broadcast standard, so we grade on a computer monitor. The included scopes in Resolve are great and very helpful in keeping us within the guidelines,” he said.

The stitching software balances across all the cameras to allow for a smoother stitch, and it tries to retain as much detail as possible, sometimes resulting in a flat looking image. However, the Beyond team wants a vibrant, punchy and strong look as the final platforms for the images are VR rigs or smartphone screens.

“The flat image pops up a few hurdles that the tools and power of Resolve help to overcome,” explained Graham. “The original footage is from a compressed 8-bit source so adding saturation and contrast to the image really brings out the compression artifacts and banding. A combination of working in a 32-bit environment in Resolve, the de-noise filter and other elements of the software allow us to push the image a lot further and really work it to achieve the look we are after without having the image looked too processed.”

“A tool we use not only on VR, but also on our other programs to help us achieve great results is the array of curves in Resolve. It’s a very powerful tool allowing amazing freedom to create and manipulate the images with such ease and allowing us to make an even and vibrant look in the VR world we are manipulating. For VR, we use Resolve not only as a grading tool but as our complete finishing tool,” concluded Graham. “The new tools and timeline in Resolve allow us to edit, grade, bring in VFX and other elements to add and enhance the VR experience all within a resolution independent 32-bit in environment.”