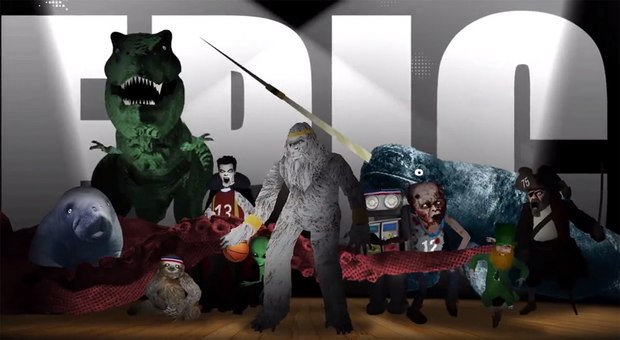 Bent Image Lab’s 2D animation for Ruffles “Epic Bracket” garners a Slam-Dunk for the brand via an interactive campaign with over 2.8 million hits to date.

Global marketing agency Deep Focus tapped Bent to create animation to mirror the “March Madness Bracket” platform, with fantasy players including vampires, dinosaurs, sloths and manatees. Released weekly, parallel to the NCAA games via the website, audience votes decide the teams that make the next cut. The six spots culminated with a win- ner at the beginning of April.

Creating work for the Epic Bracket campaign “Is a great opportunity not only to do some interactive 2D animation, but to also infuse that animation with a feel- ing of immediacy, even for people who aren’t participating in the bracket,” says Bent Director Solomon Burbridge. “From a stylistic viewpoint, it was important to elevate the ‘collage-style’ to be both modern and funny. Everyone on our team is bringing their best selves to the project and really supports the idea that interactive 2D animation can be thoughtful as well as look good.”

With audience participation leading the scripts, final output flips on a fast break turn-around; with 46 hours between script and poll winner results to web broadcast. “The schedule is both intense and rewarding,” explains Burbridge. “The team has to have various scenarios at the ready to satisfy projection of audience vote results. A strong design sense and streamlined internal pipeline is integral to our execution.”

Tight timelines did not preclude the team from having fun with the project, “One of my favorite moments,” says Burbridge, “Is the animation of the manatee slapping the keyboard really hard and making the table bend. It just makes me laugh every time I see it.”