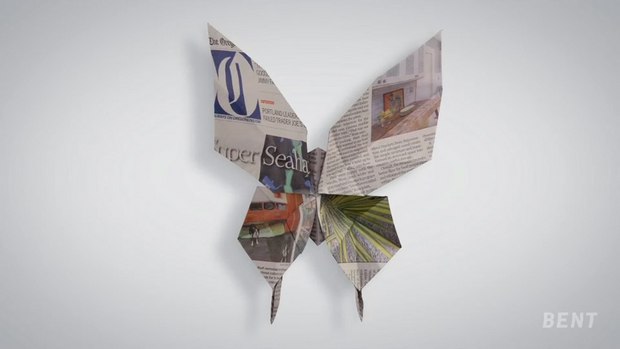 Portland, OR -- Animation and visual FX studio BENT Image Lab has produced a new broadcast spot for The Oregonian in newspaper stop-motion. Directed by BENT's Solomon Burbridge with creative from Leopold Ketel & Partners, the ad aims to present The Oregonian's new design and compact size.

Entitled "Transformation" the spot features a broadsheet of The Oregonian newspaper being crumpled into a ball or "chrysalis." The paper then transforms into an origami butterfly and then into the redesigned compact version of the paper. The butterfly and crumpled ball imagery will be used throughout the entire media campaign including digital, print and outdoor ads.

"One of the things that made this spot really strong was the simplicity of it," says Burbridge. "We were really on the same page with the clients and the agency about keeping this as focused as possible on the paper and its wonderful new format for readers. It could have been easy to try to add other distractions but we always came back to staying focused on the paper."

The newspaper shapes were created and animated by paper-artist Jen Prokopowicz. The music accompanying the spot is entitled "Convoluted Impulse" by McKenzie Stubbert.

Working on "Transformation" for The Oregonian was a passion project for Burbridge who enjoys working on productions that support the local Portland community.

"I grew up on a small Oregon farm and we always got The Oregonian," says Burbridge. "It was literally my life line to the world. I would run to the mailbox on Friday and grab out the A&E section and start looking through it. It was the first cultural representation I had."