BENT Celebrates the Seasons with Raley's 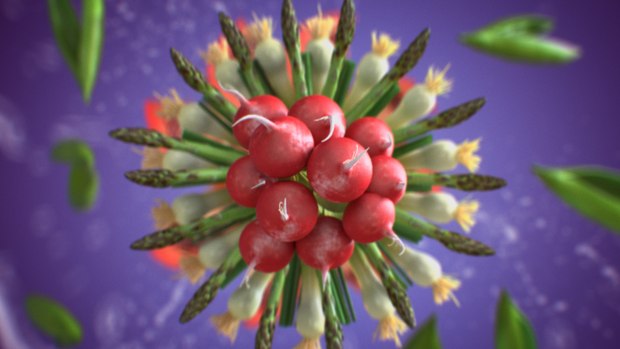 Portland, OR – BENT image lab fires up the imagination with a seamless weave of ultra-realistic CG animation, photogrammetry and gorgeous live-action for Raley's "Eating Seasons" campaign. Working hand-in-hand with agency Ivie & Associates, and the inspired folks at Raley's Family of Fine Stores, BENT Partner David Daniels directs the four spots celebrating every season of the year.

The commercials, "Holiday", "Spring", "Summer" and "Fall," are live-action "stories" of Raley's patrons and associates bookending beautiful CG food shots centered in the middle of each spot. The catchy "boom-cha" beat of The Zombies tune "Time of the Season" interweaves through each spot as delicious, photo-real foods swirl into camera, “edible lava lamp style.”  Kaleidoscopic images explode in slow motion water, juice, creams or marinades, designed and built to entice the viewer’s taste-budded imagination. Daniels employed various techniques to create each individual spot including straight CG animation and photogrammetry. In "Fall,” the last spot in the campaign, BENT Europe's Creative Director, Javier Leon, served as CG Supervisor. Using photogrammetry to produce the autumn-themed fruit and vegetables, the team sliced and stitched together shots from fifty to sixty angles of food, creating geometry and surfaces for each element. Lead artist and technical director, Galen Beals, based out of BENT Portland, tweaked final animation and blended water simulations (SIMs) with photo real pears and apples. In "Spring" the theme was fresh-growing fruits and veggies enhanced by slow motion SIM-water and created entirely in CG animation. “Joshua chose the most wicked-perfect pink/purple background color to pop the fruits and vegetables,” says Daniels. Cox was co-director on this spot

"Summer,” was creatively led by Leon using even more photogrammetry (shooting 360's on Canon Rebel T3I's) and traditional CG animation techniques. Summer is grilling season, so Leon lit the vast assortment of skewer-ready food with orange and hot red bottom light against a sky blue cloud-white background.  “It came out inspired as if by the romantic humanism of a Baroque painter,” remarks Daniels.

"There are certain objects and shots where just photographing really great food and completely mapping the hell out of it works better then anything else," says Daniels. We study every aspect, and then make a dense model taking great care with shaders to bring forth realistic intricate textures and surfaces." Ivie and Raley's had tapped BENT and Daniels the last few years to produce their holiday spots. Daniels loves working with great creatives and old friends because of the wonderful collaborative relationships that have naturally developed over the years. "It's a testament to Raley's and the imagination of Ivie to say: Let's not do ordinary, let's stand out," states Daniels. "Let's seduce viewers. Let’s reward them with a message gift-wrapped with love and respect for the audience. I think that fits Raley's business philosophy.  They are a special store with engaged people who adore and appreciate great food.  They love sharing that adventure with me, with you, and with the world."

Director, Advertising of Raley's Family of Fine Stores, Alyssa Lulie, says, "Our stores have long been known as 'famous for fine produce and meats', so we loved Bent's approach of taking the things we're famous for - and pride ourselves on in this region - and making them truly magical. David and the BENT team have not only captured the essence of each season, they have evoked a food fantasy for the senses that has truly resonated with our customers."

Ivie and Associates agree. “Every once in a while you find a creative partner that can take a crazy idea and make it magical.  That is the partnership we’ve found with David Daniels and his team," says Vice President Creative at Ivie & Associates, Anthony Woolridge. "BENT took on the challenge of exploring our idea of a 'lava lamp you’d want to eat' and made a series of beautifully crafted vignettes into a magical world of food. The series, like Raley’s, is more than just about food…it’s about experiencing what we love about the seasons and all of the wonderful flavors associated with them."