Bent Brings the Party to CMT 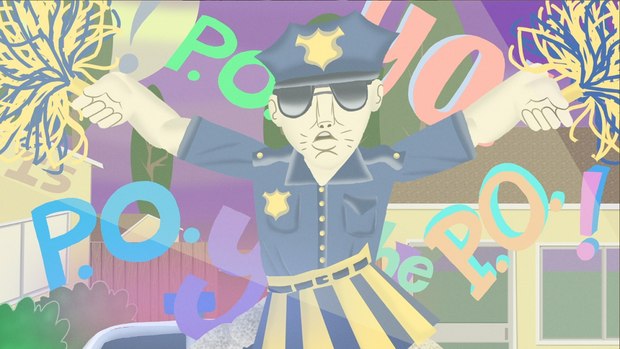 "Just watching the show you know what you're aiming for -- young people who like to party and older people who have stopped partying but can relive their youth through these moments," says Burbridge. "It harkens back to a time when partying was a badge of honor. It's like the Olympics of irresponsibility."

The eight promos each feature one cast member recalling a hazy party experience. Their stories float between stealing cop cars, getting kicked out of strip clubs, crawling through mud festivals, riding drunk on horses through Mardi Gras and of course popping a squat while the cops are cheering "Yo! It's the P-O!" Burbridge, challenged with the prospect of capturing the authenticity of said experiences, needed to find a way to conjure the soul of the show.

"We decided the best way to create these Party Down South promos was with something called 'method animation'," says Burbridge. "It's sort of like method acting except it's animation. So we were all set to go out for a night of heavy drinking and partying up here in P-town but ultimately, after two microbrews, decided to go home to bed at 10pm."

Burbridge chose a lighter color palette and the 2D "flat" animation technique to create caricatures of each person, with the intention of being true and flattering to the narrators without going over the top.

"They still look super attractive," says Burbridge. "They look like themselves but they are cute little scamp-y versions of themselves."

Burbridge also wanted to make sure that the humor was respectful to his subjects. "I like the idea of striking a really good balance between satire and cutting humor and having a loving focus on it to soften the edges a bit," says Burbridge. "You are judging things and people all day long but tempering it with the love you have for them. So it's nice to be able to project that onto things or at least feel like you do because it's probably the most realistic experience you could have."

"I was so impressed by how well Sol and his team were able to put this together," says BENT Executive Producer Ray Di Carlo. "He has such a knack for this type of storytelling, it really showcases his talents as a director as well as his excellent sense of humor!"

CMT released the first promo June 5, 2014 online and the rest over subsequent weeks.