‘Ben and Holly’s Little Kingdom’ Set to Launch in the U.S.

Award-winning preschool series from the makers of ‘Peppa Pig’ will make its U.S. broadcast debut on October 5th, 2015. 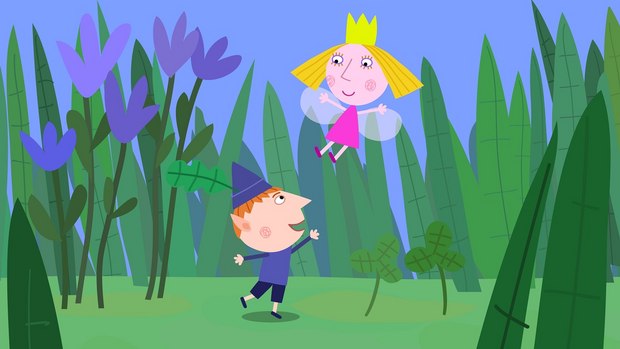 LONDON -- Entertainment One Family has finalized an agreement with Nick Jr. to bring its BAFTA and International Emmy Kids Award-winning series, Ben and Holly’s Little Kingdom, stateside when the show launches on the 24-hour network dedicated to preschoolers and moms on October 5th, 2015.

Nick Jr. has acquired both seasons of Ben and Holly’s Little Kingdom and the deal will mark the U.S. broadcast debut for the animated TV series, which is also home to eOne’s Peppa Pig. Following its 2014 award win at the International Emmy Kids Awards, several American licensees have already expressed interest in licensing Ben and Holly’s Little Kingdom and eOne’s New York office will manage consumer products for the U.S. market.

“Nick Jr. is the perfect launch pad to introduce Ben and Holly’s Little Kingdom to American audiences,” said eOne Family managing director Olivier Dumont. “We’re thrilled that the series is winning the hearts of children in so many international territories and the exposure that Nick Jr. will give the show in the U.S. will create opportunities to further expand this pre-school franchise around the world.”

Created by Astley Baker Davies, the acclaimed British animation studio behind Peppa Pig, Ben and Holly’s Little Kingdom follows the adventures of Holly, a young fairy princess whose magic doesn’t always go to plan, and her best friend Ben Elf, who doesn’t have wings and doesn’t do magic but is very good at making things. They live in the Little Kingdom - a tiny land where flowers and grass rise above the tallest towers. 104 11-minute episodes have been made to date and the show now airs in over 130 countries worldwide

With over 65 licensees globally, Ben and Holly’s Little Kingdom is gaining momentum in a number of international territories. Successful consumer products programs are established in the UK and Spain. There are also early signs of commercial success in Australia and Italy where retail exclusive merchandise launches generated strong sales last year and mass market rollouts are scheduled for those countries this year.

eOne is now readying the launch of merchandise in countries where exceptional audience viewing figures demonstrate consumer demand and licensed products are set to rollout in Greece, Poland, Germany and Benelux in the next 12 months.