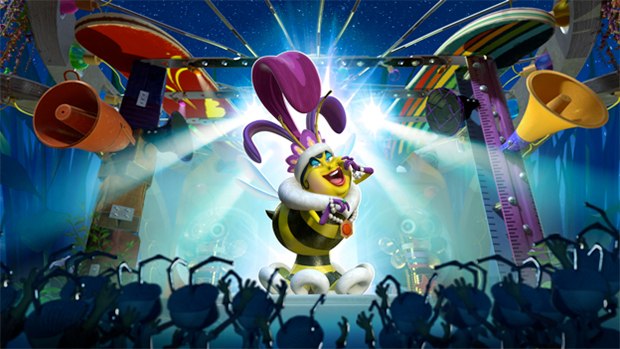 Queen Bee is the nine-time winner of the Bug Factor, a prestigious inter-garden talent show that the bugs journey to compete in in ‘Beat Bugs: All Together Now.’

Created by Josh Wakely, Beat Bugs premiered two seasons on Netflix in 2016. The animated children’s series is inspired by themes and characters found in The Beatles’ iconic music. Off the heels of the show’s Emmy win earlier this year, Netflix is bringing back the adorable bugs and some of the band’s most beloved tunes for a 48-minute special in which they venture outside the garden to attend a prestigious talent show.

In addition to Here Comes the Sun, other tracks that are covered in the special include I Want to Hold Your Hand, All Together Now and Ticket to Ride.

In the past two seasons of Beat Bugs, artists including Rod Stewart, Chris Cornell, Sia, Jennifer Hudson and P!nk have covered Beatles songs in the show.

Wakely’s aim in securing the rights to the Beatles catalog and getting superstar artists to re-record Beatles classics for the show is to re-position the legendary band’s music for a new generation. With the regular season episodes running for 13 minutes and this particular Beatles catalog spanning over 250 songs, he had plenty more to work with for this special and with a longer timeframe, Wakely and his production team were able to hone in on refreshed, vibrant animation.