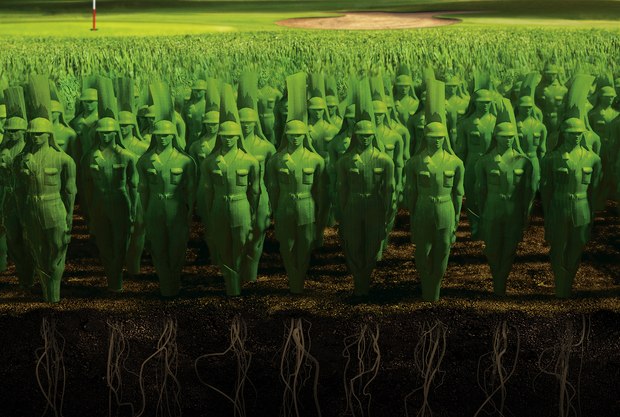 Kansas City, MO -- Jeff Beith, owner and creative director of Bazillion Pictures, restructures his award-winning 3D animation and visual FX studio as it embarks on a proactive campaign to introduce its creative services to a broader range of regions. The reorganization of the expanded facility incorporates efficient workflow with an integrated complement of services that includes in-house compositing, editing, color correction, finishing, interactive development, and audio capabilities.

For almost two decades, Bazillion has built a reputation as a sought-after creative resource for agencies and corporations seeking dynamic 3D animation, visual FX, live-action compositing, branded character animation, photoreal imagery, product visualization and interactive content. At the same time, it has evolved into the go-to company for a range of other applications, from architectural projection mapping, digital media, high resolution print and interactive apps to broadcast quality sales, training and educational videos, while attracting a growing number of projects for trade shows and events.

Helmed by Beith and executive producer Diann Roche, Bazillion Pictures’ multi-disciplined team of animators, FX artists, character animators, editors, compositors and producers bring ingenuity and originality to each project. Working with clients as their creative partners, they are committed to creating media content for both digital and traditional platforms that consistently delivers memorable brand experiences.

“Bazillion has been in growth mode since its inception,” says Beith. “Over the years we've made it our mission to anticipate the changing needs of the advertising industry, as well as develop expertise in a few specialty markets, such as agriculture and industrial. Expanding our space, investing in technology, continually improving our pipeline and handpicking a roster of diverse, top-caliber talent has been key to our approach. At the same time, we’ve been creating a strong infrastructure with meticulous asset management and an efficient workflow, freeing our artists to focus their full attention on finding innovative solutions that get the most out of every budget.”

“Up until now Bazillion‘s client base has been growing organically, with word of mouth attracting a growing number of agencies, in the Midwest corridor, as well as Chicago and New York,” says Roche. “The restructuring of the company coincides with us taking a more pro-active approach to marketing Bazillion in new regions. Working with a diverse mix of clients on a wide range of projects keeps things fresh and exposes us to different ways of thinking, which we really enjoy.”

The 5,000 square-foot boutique, located in the heart of Kansas City's Crossroads Art District, provides an open-architecture, loft-like space that's home to over a dozen custom-built animation/graphics workstations, four Unity Interactive workstations, dedicated editing and audio suites, as well as its own isolation room for recording voice-overs, sound FX, and instruments. The facility’s primary software includes 3DS Max, V-Ray, After Effects, Premiere, and Photoshop. Key to its fluid workflow and flexibility is their large on-site Render-Farm and high-speed data servers, allowing for an uncompressed workflow.

“Strong Roots,” Boone County National Bank’s award-winning broadcast/print campaign created by Woodruff Sweitzer, is one example of a project that showcases Bazillion’s talent for developing fresh, distinctive visual styles. The company’s team developed a unique “cut-paper” style of imagery to create a surreal version of Hometown USA -- with an animated organic root system growing out of the bank’s foundation, through the soil. Branches of the roots break through the ground, surfacing as flower-like shapes that intricately unfold, “blooming” into a series of objects throughout the town -- from businesses to houses and cars -- bringing home the spot’s tag line: Strong roots. Endless possibilities. The campaign, which includes five spots, took home both national and international awards, including three Tellys and two Addys.

Bazillion has also designed a number of dynamic 3D video projection mapping projects, creating complex imagery manipulated to fit perfectly to the contours of a variety of surfaces -- from detailed building facets to interior spaces.

Most recently, Kansas City’s Union Station and Quixotic called upon Bazillion to create a 3D animated architectural projection mapping video as the centerpiece of its ‘Celebration of the Century’ kickoff event, integrating a visual portrayal of the building’s rich 100-year history. The awe inspiring presentation transformed the iconic building’s ornate exterior into a living canvas with 3D animation, special effects, and photographic imagery, all perfectly synchronized to a custom score by Quixotic and BicMedia.

Bazillion’s work in the projection mapping arena also includes a project for Kauffman Center for The Performing Art’s Opening Night, which won numerous accolades, including Best of Show at Kansas City’s AAF ADDY Awards and two regional Addys. The 3D/VFX studio also created ‘‘Aquarium” and “Requiem” for the Kansas City Symphony, winner of the Gold and Silver AAF Addy Awards, respectively, for Special Effects Video, and a projection video for the Hemline Fashion Opening that took home a Gold Addy for Special Effects Videos – all in collaboration with Quixotic.

The full range of Bazillion’s skills were tapped by InQuest Marketing to create a multi-platform campaign for KOBELCO Construction Machinery USA’s exhibition at Con Expo 2014. The campaign, entitled, “Homecoming,” launched the re-introduction of their cutting-edge line of Excavators to the North American market.

Working closely with InQuest, Bazillion created a wide range of elements for the multi-faceted event, including the 3D design of “The Beast,” a transformer-like character that integrates key components of the manufacturer’s state-of-the-art Excavators, and transforms from a futuristic robot-like figure into the powerhouse SK350LC.

For this campaign Bazillion efficiently repurposed the 3D assets to create key imagery for many of its other elements, including, a one-minute football-themed action-packed video of ‘The Beast’ displayed on a 10-foot tall LED screen in their Con Expo booth, an interactive user motion-controlled game, numerous high-rez 3D renderings for print ads, brochures and banners, a 20-foot inflatable of The Beast, and promotional giveaways, such as T-shirts, hats and other branded swag. The project, which showcases Bazillion’s wide range of capabilities and seamlessly integrated approach to multi-platform advertising, is documented in a Case Study video produced by Bazillion:

“Bazillion is a close knit team of talented artists, animators, and technicians working under one roof. We bring a shared creative vision to each project, and consistently deliver a final product that exceeds everyone expectations,” says Beith. “This is a great time for us to reach out to a broader range of agencies looking for fresh, exciting media content -- and an efficient, user-friendly creative partner.”