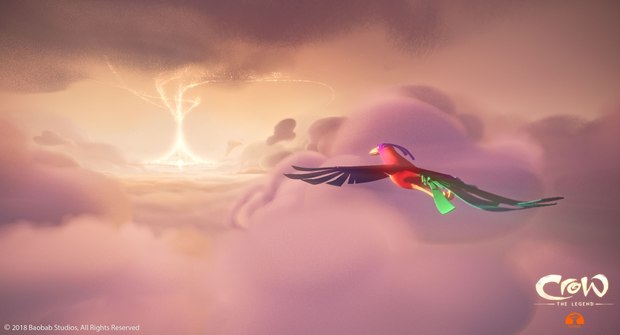 LOS ANGELES -- Baobab Studios has announced the official global release of Crow: The Legend. This award-winning story is now widely available online to consumers for the first time, offered as a traditional animated short film as well as an interactive virtual reality experience free to download within the Oculus Store.

Randy Edmonds, respected 84-year-old Kiowa-Caddo tribal elder and founder of the National Indian Urban Council, who provides the narration for Crow explains, “All Native American tales have a tradition of deep meaning and that’s why we tell the stories, sharing down the generations. When I look at the impact these legends have, the insights they represent, taking that storytelling to a modern medium is extremely exciting. The beautiful work being created -- inspired by our folklore -- is like nothing I’ve ever experienced in my many years.”

Crow, once the most revered animal in all the forest with his colorful plumage and melodic voice, must choose between himself and his fellow animals when tasked with saving them from a destructive endless winter. Realizing he is their only hope, Crow ventures in seek of help but the arduous trek irrevocably damages his voice and stunning colors. Embarrassed by his physical transformation, Crow ultimately learns that his self-sacrifice is far more beautiful and important than his appearance.

“We are excited about the opportunity to honor the Native American storytelling tradition and to share Indigenous worldview with the passionate support of Native Americans in Philanthropy,” Crow producer, writer and director Eric Darnell (Madagascar franchise, Antz) commented. “By making both versions available, we are now able to share this powerful tale with audiences everywhere and give viewers the opportunity decide how to participate in Crow’s journey in this holistic animation experience.”

Native Americans in Philanthropy CEO Sarah Eagle Heart added, “The film released in both VR and 2D allows a mainstream audience to celebrate stories from the wildly underrepresented Native American community in Hollywood. I could not be happier that these films are available during Native American Heritage Month, which pays homage to the rich culture that indigenous people share.”

Featuring an original song by executive producer John Legend, the project contains a diverse all-star cast of voice talent including: Legend as Crow; Oprah Winfrey, who makes her VR debut as The One Who Creates Everything By Thinking; Sarah Eagle Heart as Luna, a character named after Legend’s daughter; Kiowa-Caddo Tribal Elder and lifelong Native rights crusader Randy Edmonds as Narrator; Liza Koshy (Liza on Demand) as Owl; Diego Luna (Narcos) as Moth; Tye Sheridan (Ready Player One) as Turtle; and Constance Wu (Crazy Rich Asians, Fresh Off the Boat) as Skunk.