The Oscar-nominated director’s new animated short, a narrative poem inspired by the passing of his grandfather, follows the beautiful and heartbreaking moments of a man’s life; special presentations and screenings, with Baobab founders and Oh, are set for November 18-20 at the CTN Animation eXpo, in-person and online. 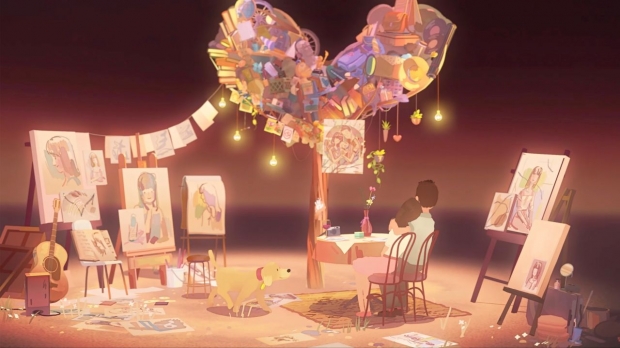 Baobab Studios just released the official trailer for its latest animated short film, NAMOO, along with a new set of images. Written and directed by Oscar-nominated filmmaker Erick Oh (Opera) and produced by nine-time Emmy Award-winning Baobab Studios, the film is a narrative poem, hand-painted and animated with state-of-the-art software and real-time technology. Inspired by the passing of Oh’s grandfather, NAMOO—which translates to “tree” in Korean, is Oh’s most personal work to date. The film follows the beautiful and heartbreaking moments of a man’s life, from beginning to end.

Top Baobab creative leaders, including founders Eric Darnell, Maureen Fan, and Larry Cutler, along with Oh and other artists on the project, will be presenting the film, with a special screening and reception, at the CTN Animation eXpo running today, November 18 through November 21.

Here’s an overview of their participation:

Join Baobab Studios founders Eric Darnell, Maureen Fan and Larry Cutler as they talk about the creation of their studio and early days of VR and immersive storytelling vis-a-vis their journey creating multiple Emmy Award-winning projects, from Invasion! to Baba Yaga. They will chat with attendees and answer any questions about their studio, projects and state of the industry. They will then be followed by the Director of NAMOO, Erick Oh, Producer and Baobab’s Head of Content Kane Lee, Production Manager Anika Nagpal, Sound designer Andrew Vernon, Art Director Eusong Lee, Lead Quill Artist Nick Ladd as they talk about the making of this hand-crafted narrative poem as they greet attendees and answer questions in a conversational and more casual setting.

Oscar-nominated filmmaker Erick Oh will chronicle his creative journey from his early days as an animator at Pixar working on such memorable films as Monsters’ University, Inside Out and Finding Dory through his indie years working on the award-winning animated short The Dam Keeper and subsequent series PIG: The Dam Keeper Poems, ultimately leading up to his Oscar-nominated animated short, Opera. He will then speak in depth about the creation of his latest collaboration with Baobab Studios, NAMOO, a hand-crafted, narrative poem come to life. Inspired by the passing of Erick’s grandfather, NAMOO -- which translates to “tree” in Korean -- follows the beautiful and heartbreaking moments of a man’s life, from beginning to end. Q&A to follow: Erick Oh, Director, Kane Lee, Producer, Anika Nagpal, Production Manager, moderated by Aubry Mintz.