Now available, the latest interactive project from the Emmy Award-winning studio behind ‘Crow: The Legend’ is an absurd, narrative-based, animated virtual reality experience. 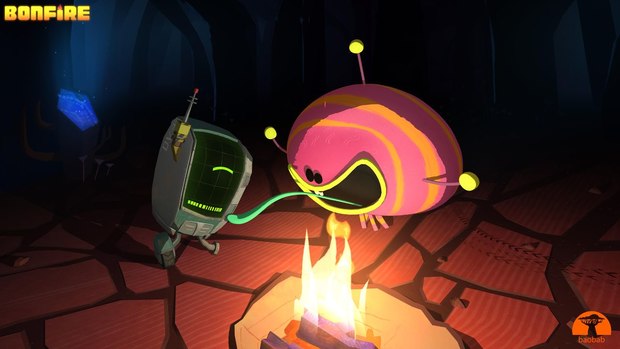 Unlike other award-winning interactive VR experiences from Baobab, in Bonfire the viewer plays the main character. As Scout 817 the viewer is fully immersed in a virtual reality as the star of their very own animated movie.  Priced at $9.99, Bonfire is now available on the Oculus Quest, Rift S and Rift.  Maureen Fan, Baobab CEO, commented, “As one of the only interactive narrative launch partners on the Oculus Quest, we wanted to provide something a bit different, an accessible yet fully immersive and interactive virtual reality where the viewer is the story. Bonfire offers the best of both games and movies for VR enthusiasts who are interested in a more casual experience.” Bonfire will be available on additional platforms which will be announced at a later time.

For Oculus Quest launch customers who enjoy the immersion and interactivity of narrative-based experiences, Bonfire is a seriously ridiculous space survival story presented as a comical animated experience. Similar to Baobab’s previous project Crow: The Legend, Bonfire has adorable characters, an imaginative world and a magical story, but also explores important themes. Aligned to Baobab’s values, Crow: The Legend features a diverse cast including Oprah Winfrey, John Legend, Diego Luna, Liza Koshy, Constance Wu and Sarah Eagle Heart. Crow is a story of sacrifice and community and with Bonfire, actress Ali Wong delivers a story of trust and friendship. “I couldn’t say no to Baobab because Oprah worked with them,” Wong explained. “If it’s good enough for Oprah it’s good enough for me! But seriously, I’m used to animation being this kind of fluffy thing that’s for kids and yes, Bonfire is funny. But, I was really surprised by the serious themes being explored through such an absurd situation. It’s a great story and I am excited to be a part of it.”

Though Bonfire is a narrative-based immersive experience with intuitive interactions, it’s not a VR game. It doesn’t have complex or demanding gameplay systems. It’s been written and designed as a casual entertainment experience but beneath the cute cartoon characters is a robust artificial intelligence system. According to Darnell, “One of the things that fascinates me about VR is creating a storytelling experience that immerses you, the viewer, into the story in a way that makes you believe that you matter. We put the viewer in situations where they must make meaningful decisions under pressure. We create highly immersive experiences not by delivering complex photo-real environments. Instead, we inspire you with characters that acknowledge you exist in their world and that you matter.” Engage in meaningful interactions with the characters and the world around you with Baobab’s award- winning real-time rendering, artificial intelligence and interactive design systems all optimized for the Oculus Quest with full 6DOF support.

Be the Star of an Absurd Alien Adventure with Ali Wong

An Animated Movie-Like Space Survival Story of Trust and Friendship

Intuitive Interactions in an Immersive World Where Your Decisions Matter In Bonfire, the latest virtual reality interactive narrative from the Emmy and Annie award-winning Baobab Studios, you play the leading role. As Space Scout 817, you are on a mission to discover a new home for the human race after it has made a mess of Earth. The stakes are high. Too bad your piloting skills lack… precision. In fact, you crash-land at night in a mysterious clearing of an unknown planet three-hundred light-years from Earth. Your only source of light is your makeshift bonfire. Beyond its glow, everything falls to darkness. And what are those strange noises coming from the alien jungle?

You have only your instincts and your robot sidekick, Debbie, to guide you. Voiced by comedian, actress, and writer Ali Wong, Debbie’s companionship comes with a signature wariness. When a chance meeting with a local inhabitant further steers your mission off course, you learn that unexpected encounters just might result in lasting friendships. In this intimate setting, you have the opportunity to embrace, explore and influence the world around you, and, perhaps, make new friends. In the end, the choice is ultimately yours: Will you follow your captain or your conscience?