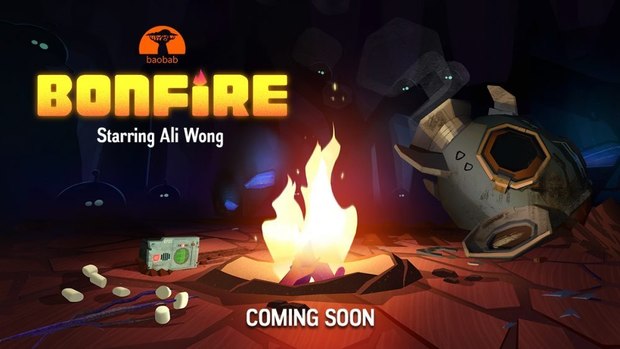 With a vision to create the most immersive storytelling experiences by melding user interactivity into the narrative, Baobab has turned the viewer into a character in every one of their experiences. Each of Baobab’s previously released projects have pushed the role of the viewer to new heights. Starting with Invasion!, which was the first VR story to make you a character. Then with Asteroids!, where the user had control over the story direction and character. Most recently with Crow: The Legend, users played an omnipotent spirit with the power over the world. But in Bonfire, Baobab has pushed the technical limits with its real-time rendering, artificial intelligence and interactive narrative systems to create a new virtual reality experience, where the user plays the leading role.

“We wanted to put the viewers in the middle of a story where they can develop believable, meaningful relationships with other characters so that the viewers feel that their interactions with these characters have legitimate stakes -- that their decisions really matter,” explains Darnell.

In Bonfire, the viewer plays the leading role. As Space Scout 817, you are on a mission to discover a new home for the human race after it has made a mess of Earth. The stakes are high. Too bad your piloting skills lack… precision. In fact, you crash-land at night in a mysterious clearing of an unknown planet three-hundred light-years from Earth. Your only source of light is your makeshift bonfire. Beyond its glow everything falls to darkness. And what are those strange noises coming from the alien jungle?

You have only your instincts and your robot sidekick, Debbie, to guide you. Voiced by Wong, Debbie’s companionship comes with a signature wariness. When a chance meeting with a local inhabitant further steers your mission off course, you learn that unexpected encounters just might result in lasting friendships. In this intimate setting, you have the opportunity to embrace, explore and influence the world around you, and, perhaps, make new friends. In the end, the choice is ultimately yours: Will you follow your captain or your conscience?