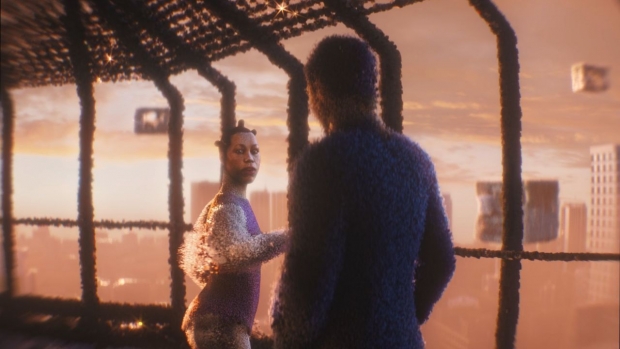 In this high concept video, frontman Dan Smith picks up where he was left in the previous video, having entered the Futurescape with The Engineer, played by Remmie Milner. As the world continues to crumble outside, our heroes float in a fantasy land made entirely of pixel-like cubes. In the digital space, their avatars have moments of intimacy and play, which intercut with their live-action counterparts.

To build this 3D universe, Simon and his team developed custom code, animating up to 90 million individual elements, each with its own defined mass and physics. The scale of this project meant that optimization and rendering on the fly were integral. This process helped to ensure there was enough computer memory and processing power for the video to be completed. Simon later discovered that Pixar had to overcome similar hurdles in making their film, Soul.

"Was it my worst decision to ditch the summer and do this video?” reflected Simon. “I certainly wondered about that while being lost with stubborn pieces of code and the general uncertainty that comes with an experimental film. Building these systems had their thrill: there was no good way to visualize what we were about to do, especially because I wasn't sure about that either! It was one of those jobs you just can't do without the right team and client. I'm super thankful for all the crazy talented - and patient! - people believing in the project and going out of their way to make it happen. You truly felt like a family. It would be amazing to do it again"

The finished product is an immersive world that elevates Bastille’s new music into an audiovisual experience.