‘Bagpuss’ Comes to iOS and Android

Peahen Games announces the release of the first official licensed ‘Bagpuss’ game app for both iOS and Android from Daredevil Development, Smallfilms, and Coolabi. 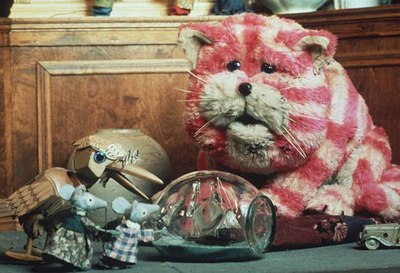 Aimed at children aged three and up, the new game app, a mixture of educational, creative and action games, will be available from the Apple App store, Amazon Kindle store & Google Play store from early October. All versions will be available worldwide in English.

This delightful new game app will give fans of all ages the chance to enjoy the adventures of the old cloth cat and his toyshop friends in a brand new format. With an intuitive interface that allows children to immediately pick up and play any of 16 games, the Bagpuss app encourages learning, letter and number skills as well as creativity and problem solving. Each game offers three levels of difficulty. As the child progresses the game progresses with him or her to provide a gentle but steady learning curve.

The app provides pictorial and spoken instructions for each game, and an abundance of delightful graphics, animation, sound and music based on the original 13-episode series. The app also offers a randomly seeded game picker and game content to promote replay value. The games, which include Mending Pictures, Finding Mice, The Marvellous Mechanical Mouse Organ, What’s the Time, Find Gabriel, and many more, are narrated by Dan Postgate, son of Bagpuss co-creator Oliver Postgate. The new game app contains no in-app purchases or data collection. In addition, parental gates exist to prevent inadvertent web access by the child when playing.

Oliver Postgate created Bagpuss with Peter Firmin, co-founder of Smallfilms, the legendary animation company behind Ivor the Engine and Clangers. Bagpuss was set in a cluttered old toyshop where a little girl called Emily would bring a toy to an old cloth cat. The cat came to life, together with his friends, Gabriel the Toad, Professor Yaffle and the mice from the mouse organ. They would then set about trying to understand the item and tell a story about it. The charm, nostalgic appeal and love of learning that underpinned this classic TV programme have made it a regular at or near the top in polls of all-time favourite children’s TV programmes.

Daredevil Development has built a reputation for developing high quality children’s apps through its work on brands including Paddington Bear, Ben and Holly’s Little Kingdom, Bob the Builder, Postman Pat, Tinga Tinga Tales, Guess With Jess and Tilly and Friends.

Daredevil Development Principal, David Mowbray, comments, “Bagpuss was one of the high points of the very distinguished Smallfilms output and has remained one of the most fondly remembered of all Smallfilms shows. The gentle humour and charming animation of this classic show lend themselves perfectly to an app that provides a mixture of educational, creative and action games that children will adore.”

Dan Postgate, Smallfilms, adds, “Even though only 13 episodes were recorded, Bagpuss — both the show and the character — has remained a hit for 40 years. This app faithfully reflects the images, sounds and themes that have made Bagpuss a hit for 40 years. Children — and their parents — will love it.”

The app launch will be supported by a full PR campaign co-ordinated by specialist public relations and marketing agency kilogrammedia, including reviews, competitions and free game giveaways.