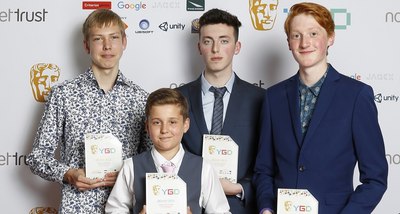 LONDON -- The British Academy of Film and Television Arts (BAFTA) has announced the winners of the 2016 BAFTA Young Game Designers (YGD) competition in association with Nominet Trust, at an awards ceremony at BAFTA’s headquarters, 195 Piccadilly in London.

The winners include four aspiring game creators aged between 10 and 18, as well as an inspirational teacher. Media Molecule, the makers of the multi-BAFTA-winning puzzle platform games LittleBigPlanet and LittleBigPlanet 2, received the previously announced YGD Hero Award.

BAFTA YGD, now in its sixth year, presents awards in two main categories: The Game Concept Award, for a written idea for a new game; and the Game Making Award, for a game made using computer software. The winners, chosen by a jury of industry experts, are:

The four award-winning young people will receive a host of prizes, including further development of their game with industry experts.

The YGD Mentor Award, presented to an individual nominated by the public for their involvement in the education of young game designers, was awarded to Michael Warburton, Head of Games Development at Cambridge Regional College and creator of Rizing Games - the first FE educational commercial games development studio in the country.

The YGD Hero Award was accepted by Alex Evans and Siobhan Reddy, Technical Director and Studio Director at Media Molecule. The games studio was selected by the BAFTA Games Committee for its continued support for young game designers.

In a message of support to all the young finalists, HRH The Duke of Cambridge, President of BAFTA, said, “When I met the winners of the 2015 competition, I saw for myself the remarkable game ideas and game-making skills of young people today and I am once again very impressed by the unique ideas of this year’s finalists. The games industry continues to be one of the most successful, creative and fastest growing in the country and I am pleased to see so many young people taking advantage of this exciting opportunity – one which could well launch their careers as the next big thing in British games.”

The Duke also praised the high number of entries which came through schools this year “highlighting the growing enthusiasm by teachers and educators to consider games as an art form and a viable career.”

Harvey Elliott, who comes to the end of his term as Chair of the BAFTA Games Committee, said, “Once again, we are overwhelmed by the amount of talent showcased in this competition by all of our finalists and today’s very deserving winners. The creativity exhibited through the BAFTA YGD Awards each year demonstrates the wealth of young talent available to the games industry, and it is a great privilege for BAFTA to play such an active role in nurturing and celebrating the game makers of tomorrow. We are always greatly indebted to the educators who continue to inspire creativity in their students and support the initiative, with special thanks this year to our YGD Mentor Award winner Michael Warburton.”

Edward Evans, Director of Strategy and Partnerships at Nominet Trust, added, “We are thrilled to be supporting BAFTA’s Young Game Designers competition once again, helping young people make the transition from game consumers to game makers, particularly girls, who make up one third of this year’s finalists. We were hugely impressed by the calibre of the applications this year, which made the judging very hard. The finalists demonstrated real creativity and skill and we congratulate all the winners and finalists on their amazing achievements.”

The BAFTA YGD competition is part of a year-round programme of activity that gives young people and educators unique insights into the games industry and access to the creative minds behind some of their favorite games. Support includes a website where BAFTA members, award winners and nominees share their insights and advice and a range of teaching resources that link the BAFTA YGD competition to the national curriculum.

Nominet Trust, the UK’s only dedicated tech for good funder, is headline partner of the initiative, working with BAFTA to develop additional schools-focussed activity addressing the under-representation of women in the games workforce. Other supporting partners of BAFTA Young Game Designers include: Criterion Games (an EA Studio), Google, Jagex, Pinewood Games, SEGA, Sony Computer Entertainment UK, Unity, Ubisoft and WB Games UK. Abertay University supports the development of the games of the winners of the BAFTA YGD competition.

One day out of the blue, Professor Eden received a telephone call from the Mayor of Eden Green. It was terrible news, there was a massive asteroid on a collision course for the village and apparently there was nothing the government could do to save Eden Green from being obliterated.

YOU ARE BEING FOLLOWED is a story-driven game, containing puzzle and exploration elements. You control of Emma, a blind woman, driven by paranoia to leave the noise of her home in a bustling metropolis in pursuit of a place of complete silence.

The world has been ravaged by a deadly and mysterious infection known as The Judgement, the lucky ones are dead and the minds of survivors are destroyed. Society crumbles and those left with their humanity intact must fight to survive. Throughout the game you must scavenge for supplies and weapons, fight your way through the hordes of Infected and reach the Airbase in one piece. You'll make friends and enemies, but in the end it's every man for himself.

SPECTRUM is a mind-bending first person puzzler that challenges you to switch colours and manipulate gravity in order to escape a digital labyrinth. You don't know why you're there or what the purpose of the place is. The only way to navigate the chambers is completing increasingly challenging puzzles, the more you overcome, and the more you learn the dark secrets this digital place hides.

Michael Warburton is Head of Games Development at Cambridge Regional College. As part of his work in leading the BTEC Level 3 Computer Games Development Course, he has created Rizing Games - the first FE educational commercial games development studio in the country. As part of Rizing Games, Michael’s students now run a stall at E3 every June and continue to be the only UK-based college or University to attend and exhibit commercially released games.

The nine other finalists, nominated by the public, were:

Media Molecule is a game development studio based in Guildford. Founded in 2006 by a group of like-minded friends looking for new creative challenges, Media Molecule has grown from humble beginnings to become one of the industry’s most pioneering developers, constantly pushing the boundaries between the player and the creator. Whilst maintaining a small family feel, Media Molecule has gone on to develop BAFTA-winning, critically acclaimed titles such as LittleBigPlanet, LittleBigPlanet 2 and Tearaway. The studio consistently aims to tell beautiful and compelling stories that give players the power to go forth and create their own adventures and their own worlds.