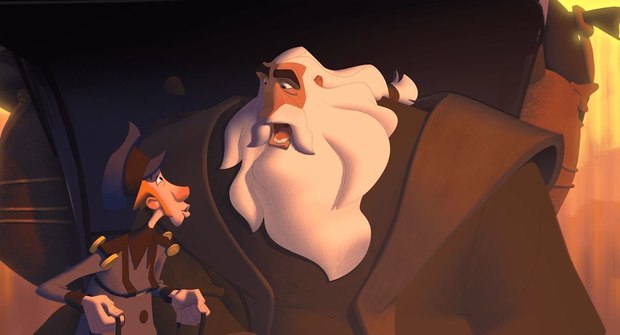 Sergio Pablos (Sergio Pablos Animation Studios) will speak about Netflix’s first original animated feature, the critically acclaimed Klaus, which he wrote and directed; the 2D animated film has just received seven Annie Awards (including Best Feature), a BAFTA Award and is nominated for the Academy Award for Best Animated Feature. Pablos is known for working as a supervising animator on Disney films such as Tarzan and Treasure Planet, as well as for having developed the original story upon which films like Despicable Me and Smallfoot are based on. His career in animation spans over three decades. “If I’ve learned something after 30 years of working in animation, it is that you can’t predict the future,” he says. “So many of the sure bets did not happen, and so many unexpected developments changed the landscape forever. But, as a film maker working in animation, I try to focus on those things that are an essential part of human nature in my stories, things like empathy and emotion, because those will always be there.”

From werewolves to the Dark Asher – the design, look and animation of some murderous creatures from the fantasy series Carnival Row by Amazon Prime will be the topic of animation supervisor Jenn Taylor’s (Image Engine) talk. She will touch on how Image Engine’s pipeline has evolved to create complex creatures for the small screen. In her career, she has contributed to titles such as Fantastic Beasts and Where to Find Them, Game of Thrones and Lost in Space, moving through the ranks from animator to senior animator, then lead and finally to animation supervisor. Speaking about the future of animation, Taylor commented, "With the entertainment trend moving towards streaming media, we're getting more opportunities to create high-end, feature film quality 'series' visual effects. I'm excited by the content already being produced, and I expect we will continue to see more, with progressively higher standards. This is positive for both viewers and artists! We all want to create content that we're proud of, and with the increasing number of streaming platforms and series releases, we continue to be inspired and driven to improve year by year."

AWN spoke to Taylor at FMX 2019 about her work on the "Loot Train Attack" from Game of Thrones. Watch our exclusive video interview below; you can view all 14 extended AWN-FMX 2019 interviews here!

Phil Davies (The Elf Factory) has been producing TV programs and animation since the early 1980s; he’s won six BAFTAs and an Emmy Award. Most recently he has produced two multi-award-winning animated children’s series – Peppa Pig and Ben and Holly’s Little Kingdom. At FMX 2020, Davies will give a presentation on Peppa Pig, which has been sold to over 180 territories around the world and has spawned a large licensing program. Currently, it is the number one preschool brand in Great Britain, Spain, Italy and Australia with large rollouts underway in the USA, China, South America and Russia. How does Davies himself “Imagine Tomorrow?” “Tomorrow's World was one of my favorite programs as a kid, and I've always loved exploring new tech, new ideas and ways of working,” he shares. “Technology may move on but still the basic rules of storytelling hold true no matter what wonderful new wiz bang medium may be invented, either next week or in the next millennia."

Joe van den Heuvel is a Software Engineer at Valve, where he focuses on advancing the state of real-time animation. He is responsible for creating the Source 2 Engine's new runtime animation system that is shipping first with Half-Life: Alyx, as well as SteamVR's Skeletal Input API. After almost two decades of developing animation and physics technology to bring characters to life, he is more excited than ever about the new opportunities that VR presents for audiences to connect with virtual characters.

The FMX trailers are traditionally created by students of FMX organizer, Filmakademie Baden-Wuerttemberg's Animationsinstitut. For the 25th anniversary, the animated short Mulm has been the basis for a series of four trailers that give FMX its 2020 design. Mulm (Directors: Carol Ratajczak, Tobias Trebeljahr | Producer: Laura Messner | Technical Director: Seyed Ahmad Hosseini | Sound Design: Marc Fragstein | Film Music: Alexander David Wolf) shows a visual trip through the distorted perception of the protagonist – an obsessive physicist observing a distant Nucleus emitting impulses. But something is constantly bugging him, keeping him from his work, and driving him into madness! Watch it below!

Projects for Animation Production Days (May 6–8, 2020, Stuttgart) can be submitted until February 20. APD – a joint venture of FMX and Stuttgart Festival of Animated Film (ITFS) – is a curated business platform that brings together international co-production, financing and distribution partners for animation projects in efficient one-on-one discussions. The APD are looking for innovative projects at the concept or development stage in the following formats: feature film, TV series, TV special, short, game, mobile content, cross-media and transmedia. Production companies and studios who do not wish to present their own project but instead are seeking projects in which they can become involved as co-producer or service provider can register for the co-producer program (further info on project submission and registration).