‘Bad Seeds’: Award-Winning Filmmaker Claude Cloutier is One to Watch

The Canadian filmmaker, known for films like ‘Carface’ and ‘Sleeping Betty,’ brings us a powerful tale of rivalry and greed, deftly played out with carnivorous plants. 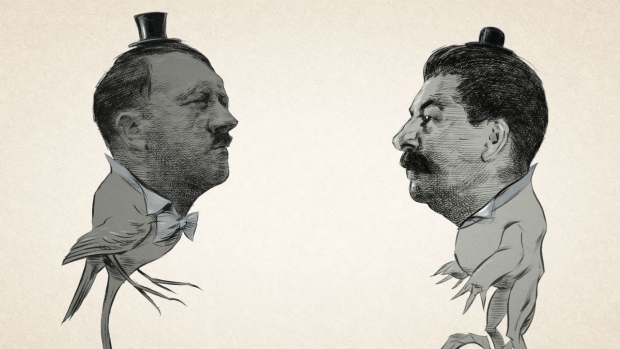 Canadian filmmaker Claude Cloutier has crafted another gem with his latest animated short, Bad Seeds. This modern-day fable explores our fatal obsession with progress, as played out in a battle between two carnivorous plants. Deftly connecting growth with rivalry, and evolution with competition, Cloutier has constructed a stunning work that’s peppered with nods to iconic historical figures and a wide variety of pop culture references.

Named as an official selection at over 27 film festivals, Bad Seeds has already garnered the Best of the Fest and the Comedy Short awards at the Los Angeles Animation Festival, the Audience Award at the Sommets du cinéma d’animation in Montreal, Canada, and Best Animated Short at the New York City Short Film Festival, along with awards at other prestigious venues.

Bad Seeds is among the 15 films shortlisted for this year’s Oscar for Best Animated Short Film.

Below, Cloutier shares some aspects of his creative process in a rare peek behind the camera.

For the pleasure of drawing

An acclaimed filmmaker with a background in graphic novels, Cloutier often takes an illustrator’s approach to animation, tackling current or timeless issues while simultaneously evoking a sense of nostalgia. As a result, his films stand out for their strong focus on drawing. His work contains an elegance of line and graphical richness that are rare in animation, a medium that demands countless iterations of the same drawing.

“I do these kinds of drawings knowing full well that very few people will be able to truly appreciate my efforts,” Cloutier says. “But I believe the richness of the drawing moves audiences at a subconscious level… they can sense the details, even if they can’t articulate them.”

As an artist, Cloutier has honed his ability to control shapes and create works of stark realism infused with emotion, and his signature style has come to rely on this ability. In order to achieve his desired outcome, Cloutier must essentially draw the film twice -- once with technical precision and then again more freely. This results in a final film where the imagery is light but is born from a solid foundation.

At its roots, Bad Seeds is a cautionary tale about rivalry that goes beyond survival into the territory of greed. It’s played out by two plants who are unable to share the wealth of mosquitos that surround them, instead engaging in a battle for top position that leads to self-destruction.

Conflict is a recurring theme in Cloutier’s work. “I have a kind of fascination with war. I read a lot, especially about the two world wars. I’m always trying to understand how human beings could have come to that level of destruction.” Due to this influence, audiences will spot many historical figures popping up in the film, including Hitler, Roosevelt, Stalin, Kennedy, Khrushchev, and even Queen Elizabeth.

And Cloutier’s fascination with history doesn’t begin and end with the subject of war. He also collects historical atlases, finding a similarity between animation and maps. “Maps are images that you can take your time dissecting. There’s a sort of parallel there with the possibilities and power of animation, which is also a synthesis of the world rather than a realistic and exact representation of it.” Another influence on Cloutier’s work is his interest in science, which runs deep. This fascination can be seen in many of his films, including From the Big Bang to Tuesday Morning, and perhaps most notably in the series he created with Martin Barry and Thérèse Descary, Science Please!, a wide-ranging collection of one-minute shorts that explain scientific concepts, of which he directed five. In Bad Seeds, this influence is best seen through his use of hybridization and metamorphosis in depicting the two competing plants. This is one of Cloutier’s biggest strengths: his ability to use this technique of morphing images to satirical ends.

“Cartoons are an interpretation of reality,” he states. “And in that sense, they are related to caricature, which deforms reality for satirical purposes. In an animated film, this deformation takes place in time, over a duration -- hence metamorphosis.”

While this sounds obvious in theory, that’s not always the case in practice. At one point in Bad Seeds, one of the plants morphs from Hitchcock into a frog. “That was a graphical challenge, a challenge of animation. I like to push the limits of my drawing, and creating these kinds of metamorphoses is a real playground for me. The desire to push my limits is probably the reason for things such as my abundance of details. When I start a project, I always want to make things other animators either can’t or won’t make.”

Most of Cloutier’s films stem from some flash of inspiration, usually derived from graphic exploration or research drawings. Between projects, he spends a lot of time drawing and improvising, coming up with the images that drive him to create an entire film. “That’s how I proceed,” he says. “It comes from an image, a drawing that triggers in me the desire to work in a certain direction.”

A natural-born storyteller, Cloutier then teases out the narrative, finding the general message he wants to convey. “Beyond the pleasure of animating, it’s important that there be a message.” In the early stages, the film can go in almost any direction. He works in different styles - cartoon, surrealism, realism - in an effort to determine which way he wants to go. The ultimate choice is usually based on instinct… and a consideration of how he wants to spend three years of his life. It’s crucial to Cloutier that he enjoy his work, so he takes this consideration seriously. Whatever idea he settles on, he ensures the film has a compelling narrative arc and contains that ever-important message. Most often, his films take the form of a fable, drawing on the traditional format of a short story with a strong moral. In place of the traditional animals used in fables, Cloutier employs plants (Bad Seeds), cars (Carface) and fairy tale characters (Sleeping Betty).

Bad Seeds, co-produced by L’Unité centrale and the National Film Board of Canada, is streaming free on the NFB’s YouTube channel until February 7, 2022, in the US and Canada.

The film was edited by Guillaume Fortin with sound design by Olivier Calvert, who was on Sylvain Bellemare’s sound team for Denis Villeneuve’s Arrival, winner of the 2017 Oscar for Best Sound Editing.