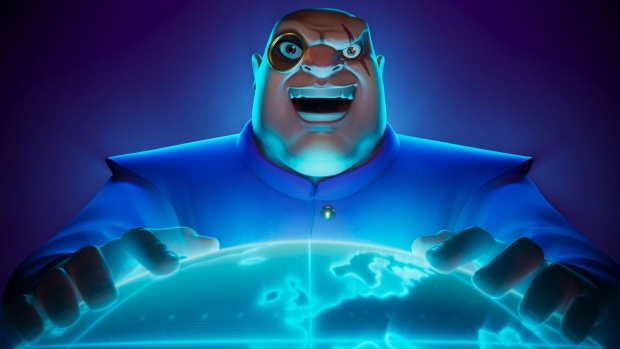 Hasraf “Haz” Dulull and He Sun have just shared with AWN a CG game cinematics trailer they created for Rebellion Studios’ Evil Genius 2: World Domination. Directed by Dulull alongside Sun, Head of VFX at Rebellion Film &TV, the piece was produced using a combination of Maya, Houdini, and Unreal Engine.

The game, developed and published by Rebellion (Sniper Elite 4, Zombie Army 4), lets you live out your dreams of being the bad guy: build your secret island lair, recruit and train a workforce of loyal minions and powerful henchmen, defend your base from the Forces of Justice, and dominate the world stage. All before lunch!

According to Dulull, “Our production timescale was around 6 months from concept to delivery. I wanted to tell a story within two minutes that showcased the game’s world building involving espionage and retro-futuristic tech driven by the characters that are all basically megalomaniacs, but do it in a fun and stylish way, similar to those classic spy movies. Early James Bond, even Austin Powers served as reference.

“We have a very collaborative creative process,” Sun adds. “Every artist felt involved in the creative and technical decision-making when producing this trailer, as they were working with the director directly. We have a small team, which means we are flexible and adaptable. We have embarked on the latest technology, utilizing the USD-based Houdini pipeline, rendered via Redshift, and Unreal Engine.”

Noting the pandemic’s impact on the project, Dulull explains, “The big challenge was producing this project during lockdown. Thankfully, with Rebellion’s super organized and secure pipeline structure and the use of Shotgun / remote servers, I was able to direct the team, block out cameras, and work closely with the animation and CG artists intimately to achieve the shots, while frequently updating the edit in Davinci Resolve on my end as the dailies come in."