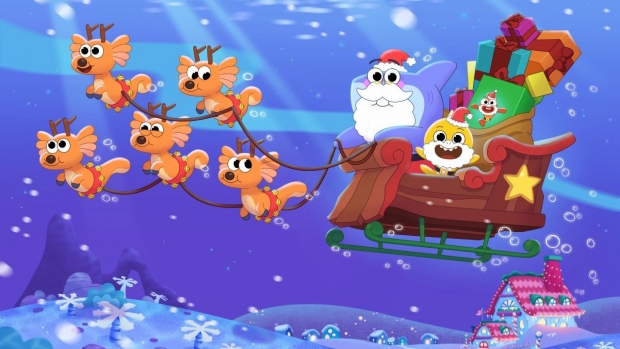 Just in time for the holidays, Nickelodeon’s Baby Shark’s Big Fishmas Special premieres Friday, December 11, at 12:30 p.m. (ET/PT). The special marks the series debut of the brand-new animated series Baby Shark’s Big Show!, based on the world-famous pop culture phenomenon. In the episode, the season’s hottest toy - Burpin’ Bubbz -is at the top of Baby Shark and William’s Fishmas wish lists, and when Santa Jaws goes missing, it’s up to them to save the holiday.

Following the premiere, the holiday special will encore Monday, December 14, at 7 p.m. (ET/PT) on Nickelodeon. It will be available on Nick Jr. On Demand and Download-To-Own services, as well as NickJr.com and the Nick Jr. App, which will also feature short-form content.

Baby Shark’s Big Fishmas Special is part of Nickelodeon’s “Nickmas” holiday-themed lineup which features festive premieres and specials from the network’s live-action, animation and preschool series, including all-new episodes of hit series Blue’s Clues & You!, The Casagrandes, Danger Force, All That and more, plus classic fan-favorite holiday episodes of Rugrats, PAW Patrol, SpongeBob SquarePants and The Loud House.