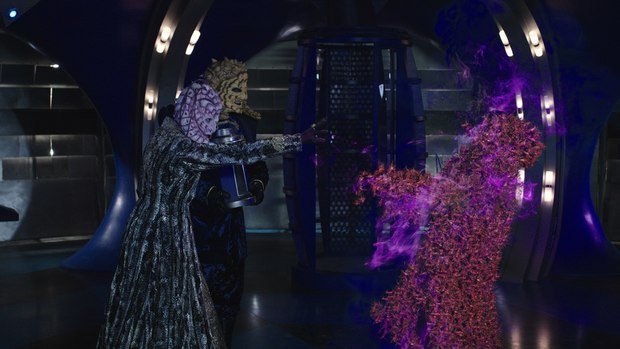 Led by Grant Hewlett, Howard Jones and Melanie Byrne, axisVFX is a spinoff of award-winning animation studio Axis. The company has created effects for productions including Prince Caspian, Hellboy, Doctor Who, Charlie and the Chocolate Factory, Clash of the Titans and Harry Potter.

This is the third time VFX supervisors Hewlett and Jones have worked with the BBC team on the popular kids show, having formed the backbone of the team that delivered series one and two. The show follows Tom Clarke and his friend Benny Sherwood as they try to save Earth from the latest Nekross alien threat.

“For series 3, BBC Producer Derek Ritchie was keen to further develop the VFX style seen in the first two series but also push the quality and integration,” Hewlett said. “There are over 270 VFX shots in the show the majority of which are magical effects. Streamlining the tools in this area was the key to unlocking a more efficient workflow. This new workflow enabled our team of FX artist’s greater flexibility and realism in crafting seamless effects to enhance the story.”

Newly appointed axisVFX FX lead Joe Thornley-Heard used Houdini to create a range of FX tools for the magic that could be used quickly and effectively by the FX team in Bristol and Glasgow. The Houdini tools were complex under the hood but allowed artists access to only the controls they needed to manipulate the particle and fluid simulations for the complex magic.

“The look of the magic FX has been established since series one,” said Jones. “The challenge however is that although the look is known, almost every shot requires unique tracking, animation and compositing into the plate. Joe’s feature film background allowed us to increase the quality and our Houdini and Nuke workflow allowed us to keep to the challenges of a television production schedule.”

The axisVFX team worked with VFX art directors Ste Dalton and Nick Losse, who had also been involved in series one and two. Dalton and Losse designed a range of new elements for the series three show, including new characters, magic FX and alien weapons.

Hewlett continued his on-set supervision duties from the earlier series and worked with all of the shows directors to provide solutions as shoot requirements evolved and changed on location and in the studio. Hewlett and team provided innovative approaches including 3d printing CG characters to allow the BBC art department to have practical versions for the actors to hold and interact with.

“This series I gave the axisVFX team two major challenges -- make the visual effects of our alien and magical worlds feel more integrated and grounded, and find new innovations to keep our audience surprised with unexpected spectacle.” said BBC Producer Derek Ritchie.” On both fronts they have done a tremendous job. Series 3 of WvA has some of the most original and unnervingly convincing effects ever seen in children’s drama – from impressive blaster bolts and scorching, to a witch gathering herself together from rolling green smoke, to a villain dissolving into dust before your eyes. The Magic has never been more magical, and that’s all down to the original creative approaches from the axisVFX team.”

“It’s been a pleasure to work with the BBC team again,” said axisVFX managing director Richard Scott. “We’ve enjoyed the challenge of pushing the VFX on this fun show even further than last time around.”