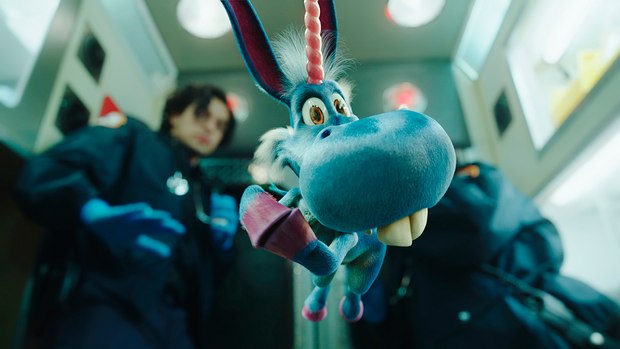 U.K.-based axisVFX collaborated with the showrunners of ‘Happy!’ to bring the show’s eponymous star to CG life. axisVFX, working in tandem with Axis Studios’ three creative sites across the U.K., collaborated with showrunners Brian Taylor and Patrick Macmanus on the creation of Happy -- a fully CG character that plays a leading role throughout the season’s eight episodes. Axis was responsible for developing concepts, animation and final rendering, ensuring that Happy, despite his cartoonish appearance, felt like a photoreal and believable addition to the show’s world. The effort, attention and screen time enjoyed by Happy -- some 100 shots per episode -- is unprecedented for a CG character on a television show.

axisVFX was also responsible for the creation of 40 other CG characters introduced during the series’ runtime -- including Happy’s villain, Raspberry, the three-headed dog -- and also lead the production of three 20-second marketing spots. The team also produced animation of Happy for a series of bespoke promos for the show as well as an AR app, which enables users to see the character appear in the real world via their smartphone screen.

“It was an amazing challenge to work on a TV CG character that wasn’t just a one-episode cameo, but a lead protagonist in his own right,” says Grant Hewlett, co-founder and VFX supervisor at axisVFX. “It’s almost unheard of, and indicative of just how much the television landscape is changing in a post-Netflix world. It was an amazing journey to feel out the character and be given so much trust in his artistic direction. axisVFX put 110 percent into every frame, and we couldn’t be prouder of what’s ended up on screen.” A turn sheet for Happy, created by axisVFX.

“It’s amazing to be part of the growth in graphic novels being adapted into TV shows -- The Walking Dead, Preacher, The Tick and so on,” says Paul Schleicher, executive producer at axisVFX. “Happy! is a vibrant, gory, hilarious roller coaster of a TV show; it was a huge amount of fun to pitch the ever-positive character of Happy against the acerbic and nihilistic Nick Sax, and to develop what that meant in animation. The whole Axis Studios crew pitched in across London, Bristol and Glasgow, using the individual expertise of each location in order to make this show the success that it is.”

axisVFX has previously worked on the Royal Television Society Award-nominated visual effects for the BBC’s Doctor Who. Its artists are currently working on Aardman Animation’s Early Man, due for release in February.