ArenaNet taps Axis and Director Stephen Donnelly to create a teaser trailer for the second installment of the multiplayer online role playing game. 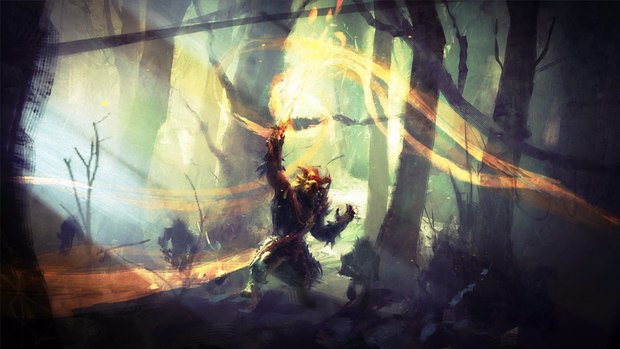 The fastest-selling Western MMO in history and one of the most highly acclaimed games of all time, Guild Wars 2 is set in the fantasy world of Tyria and features a storyline that is responsive to the player’s actions. The franchise has established a strong visual identity through its incredible concept art and it is this artwork that proved the inspiration for the Guild Wars 2: Heart of Thorns trailer. The trailer was initially embedded at the end of the game’s Living World season 2 finale, where it teased the next chapter in the game’s ongoing saga and set the stage for a formal unveiling of the expansion at PAX South.

Axis director Stephen Donnelly worked with the creative team at ArenaNet to explore how to bring the concept art to life in a way that felt like the audience were moving through a three dimensional world filled with bold brush strokes.

“What has made the Guild Wars concept art so incredible over time is its ability to capture the fantasy world’s emotion and dynamic action with as few brush strokes as possible” said Director Stephen Donnelly. “This illustrative approach has become synonymous with the Guild Wars brand and I wanted to ensure we created a film that people instantly recognized as the Guild Wars style.” The trailer begins on black with only a few palette knife paint strokes describing a fiery dragon’s eye. From here the trailer seamlessly flows through lands and time, shifting perspective, location and travelling in three dimensional space. The sequence unfolds throughout using this blend of visual storytelling and a powerful voice over and soundtrack before finishing on the final rallying cry to the players.

The Axis team built on approaches they had used on other stylized and illustrative projects. They created 3d characters that were rendered with brush stroke style shaders that not only defined the shape and colour but also broke up the silhouettes creating a much more organic painted feel.