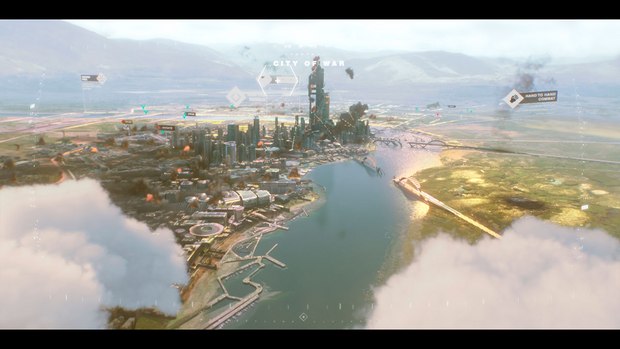 Axis Animation created the digital world of Azana for the U.K. drama series ‘Kiss Me First.’

GLASGOW, SCOTLAND -- Axis Animation has played a central role in creating the animated virtual worlds of Channel 4 and Netflix’s thriller Kiss Me First, which is produced by Kindle Entertainment and Balloon Entertainment.

Axis Animation delivered 543 shots across 50 minutes that weaves in and out of the series’ live action sequences.

Working in collaboration with Balloon and Kindle, Axis Animation was responsible for the CG creation of Kiss Me First’s virtual world of Azana. The 50-strong team contributed numerous pivotal narrative scenes in fully animated CG across the series’ six episodes and depicted the cast’s likenesses and performance in the digital realm.

This work included all of pre-production and design of the characters and world as well as the creation of emotive digital characters such as Shadowfax, Mania and Adrian, and large-scale environment work, including sweeping battle sequences on a scale never before seen in a television drama -- all designed to enhance and augment Kiss Me First’s immersive narrative.

Axis Animation collaborated closely with showrunner Elsley and executive producer Melanie Stokes and live-action directors Misha Manson-Smith and Tom Green to seamlessly blend animated content with the live-action storyline. The actors were captured using a motion-capture workflow to create the performances of their digital counterparts -- a first-time experience for many of the cast.

Creating the digital avatars of the series’ eight main characters required artists from Axis Animation’s studios in Glasgow and London to work in close collaboration. The animated characters needed to share a likeness with their real-life counterparts and also to elicit empathy from the audience, as Kiss Me First is a drama that is primarily about human relationships. In order to hit these all-important narrative beats, the Axis Animation team used highly advanced animation techniques, capturing subtle details in the actor’s performances and adding nuanced physical movements.

Axis Animation is based in Glasgow, Scotland and specializes in high-end genre animation for the television, film and video-game industries and beyond. Recent projects include work on IPs such as Heroes of the Storm, League of Legends, Destiny and Horizon: Zero Dawn.

Axis Animation is part of Axis Studios, a U.K.-based creative outfit with a global clientele and boasts one of the largest CGI production staffs in the country.