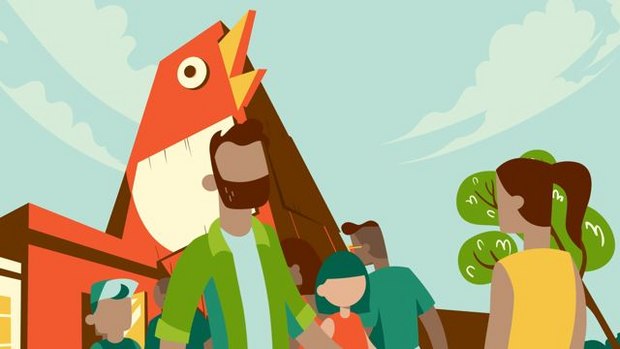 A new animated short, Big Chicken Small Movie, pays homage to Marietta, GA’s beloved 56-foot-tall steel fowl. In the film, a young boy who’s a bit of an outcast finds a friend in the gigantic steel chicken, and they go on an adventure in North Georgia.

For KFC franchisee owner and VP of marketing for KBP Foods Anthony Gianino, the film marks the culmination of an exciting project. The beloved “Big Chicken” KFC restaurant reopened to the public May 11 following a $2.2 million renovation. “The Big Chicken has been a local pop culture icon since 1963. There was a board game in the 70s and for years the Marietta History Museum’s most popular souvenirs have been Big Chicken shirts, ornaments and even bird houses. On New Year’s Eve, Marietta doesn’t drop a disco ball, they drop a Big Chicken,” said Gianino. “And, now, there’s Big Chicken Small Movie -- a sweet celebration of a Georgia town and a giant steel chicken.”

From the beginning, the intention was to make this film as Atlanta-focused as possible. The creative team from Wieden+Kennedy Portland, KFC’s creative agency, is from the Atlanta-area, and Atlanta-based animation studio Awesome Inc was tapped to bring the short film to life.

“We were so excited when W+K reached out to us about the Big Chicken project,” said Awesome Inc founder/EP Ashley Kohler. “As a native Atlantan, I’ve grown up knowing and loving the giant KFC icon. Having this opportunity to work with a world-class agency on a local symbol, something dear to our hearts, was like winning the lottery. We can’t say enough about how collaborative, kind, and supportive W+K has been, how incredible the people we’ve met from KFC were, or how beautiful the renovation is at the franchise. We hope everyone gets a chance to see it at some point!”

For Awesome Inc, known for its TV and commercial work, Big Chicken Small Movie was the perfect blend of interests and the opportunity to honor the local monument in a charming, design-driven tale of friendship that launched on Sunday, August 6: National Friendship Day.

“I remember the first time I saw the big chicken. I was driving around Marietta doing errands and wham! There it was. I thought it was so amazing that I stopped to take a photo and post to my Instagram,” Awesome’s design director, Craig Sheldon, shared. “It’s been really fun and an honor to work on a short revolving around this iconic piece of Atlanta history. Wieden+Kennedy had a really inspiring vision for the project and it’s been a joy collaborating with them throughout the process.”