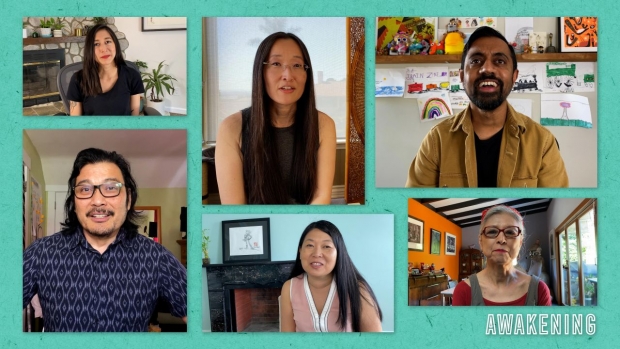 Oscar-nominated producer Peilin Chou (Over the Moon) has directed a personal, and powerful new video, Awakening, a #StopAsianHate PSA that highlights the contributions of Asian Americans to the art of animation. Released today in response to the rise in Asian violence across the US, and in honor of Asian American and Pacific Islander Heritage Month (AAPIHM), Awakening brings together a great line-up of artists and creators that includes Daniel Dae Kim, Bowen Yang, Ken Jeong, Phillipa Soo, Margaret Cho, and BD Wong, as well as animation industry stalwarts Ronnie del Carmen, Jennifer Yuh Nelson, Jinko Gotoh, Sanjay Patel, Gennie Rim, John Aoshima, and Henry Yu, among others. The film was officially released this morning by CAPE, the Coalition of Asian Pacifics in Entertainment, a group founded in 1991 to advance representation in Hollywood through engaging creative talent and executive leadership, providing cultural consulting, and championing projects to support their success.

According to Chou, “This past March, the morning after the incidents in Atlanta, like many I felt horrified, angry and completely helpless. I wanted so badly to take action, and figure out a way to contribute something positive, but I felt overwhelmed and paralyzed about what any one person could do in the face of such senseless acts and so much hate. After a day of reflection, as a filmmaker and producer, I decided to approach this the only way I knew how -- by telling stories.”

Reaching out to friends and colleagues in the animation industry, and beyond, Chou created the film as an anthemic celebration of Asian America “that acknowledges the ongoing frustrations the Asian American community has faced, particularly over this past year.” “But at its heart,” she continues, “it is an uplifting and empowering piece celebrating Asian Americans, with a spotlight on artists whose work has changed the world.”