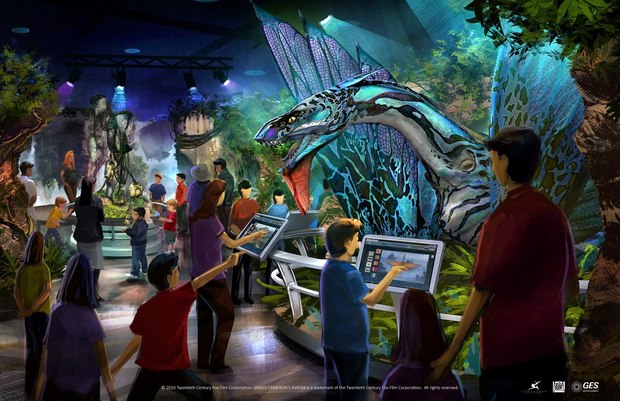 GLENDALE, CA -- AVATAR: Discover Pandora, a spectacular new, state-of-the-art interactive exhibition, will make its global premiere in Taipei, Taiwan, on December 7. The announcement was made by GES, along with Lightstorm Entertainment, and Twentieth Century Fox Consumer Products (Fox).

In this new 12,000-square-foot entertainment and educational experience, visitors of all ages will be able to explore the scientific and wondrous discoveries found on the world of Pandora. Presenting Pandora as a real place, AVATAR: Discover Pandora will give visitors the opportunity to interact with the exhibition through a series of exciting and engaging immersive environments that highlight Pandora’s diverse flora and fauna, exotic wildlife, and the amazing culture and mythology of its indigenous people, the Na’vi.

GES, in collaboration with Lightstorm and Fox, will tour AVATAR: Discover Pandora to additional global markets after its premiere stop in Taipei, Taiwan.  Additional details about this exciting exhibition will be released in the coming months.

GES’s creative team has been working closely with Lightstorm and Fox to create an exhibition as authentic and groundbreaking as James Cameron’s remarkable 2009 film AVATAR.  The scope for AVATAR: Discover Pandora captures the phenomenal beauty of the alien world, and brings it back to Earth for an intriguing look at the many ways Pandora reflects our own planet.

“GES is absolutely thrilled to give Taiwanese fans of AVATAR the world’s first opportunity to explore Pandora in a real-life setting through our newest touring exhibition,” said Steve Moster, President and Chief Operating Officer, Viad Corp.  “Visitors will truly be amazed by the wonders of Pandora, and we are proud to premiere this state-of-the-art exhibit in the Asia-Pacific market.”

Kathy Franklin, President, Franchise Development, Lightstorm Entertainment, added, “Our fans around the world often tell us that they wish they could travel to Pandora, and this touring exhibition gives us a unique opportunity to bring the wonders of Pandora to them. This exhibition has something for everyone, from fans of the film who want to experience Pandora in a brand-new way as they await our four theatrical film sequels, to families looking for an exciting activity, or to school groups wanting to explore science through an inspiring lens.”

Featuring captivating settings such as the Hallelujah Mountains and Tree of Souls, as well as life-sized recreations of creatures including the Banshee, Direhorse, and Viperwolf, visitors to AVATAR: Discover Pandora will be able to experience the science and wonder of Pandora firsthand.  The dynamic guest experience will allow visitors to: Enter an exhibition curated by the Pandoran Research Foundation where they will leave the 21st century behind and step into a 22nd century world of the AVATAR franchise;

“In collaboration with the visionary team at Lightstorm and our technologically advanced partners at GES, we are thrilled to support AVATAR: Discover Pandora – which I am confident will be a highly entertaining exhibition that promises to engage, educate and captivate visitors around the world,” commented Greg Lombardo, SVP of Global Live and Location Based Entertainment, 20th Century Fox Consumer Products.

“Beast Kingdom has always been dedicated to bringing the newest, hottest European and American film peripheral products as well as major international exhibitions,” said KK Yang, President, Beast Kingdom. “We are elated to work with teams from Fox, Lightstorm and GES to make Taiwan the first stop of the worldwide tour of AVATAR: Discover Pandora.”

“For the last two years, GES’ creative team has been hard at work designing and producing large and small scale displays. As fans of James Cameron’s artistic vision, we utilized the best special effects experts, production designers and artists in the business to create a truly authentic, immersive, and entertaining experience for visitors of all ages,” said Eddie Newquist, Chief Creative Officer and Executive Vice President of Entertainment at GES.

Released in 2009, James Cameron’s AVATAR is the highest-grossing film in motion-picture history, with a box-office gross of nearly $2.8 billion. The film quickly which became a worldwide phenomenon will be followed by four sequels, with the first sequel due for release in late 2018. AVATAR was named best picture at the Golden Globe Awards and won numerous Academy Awards.