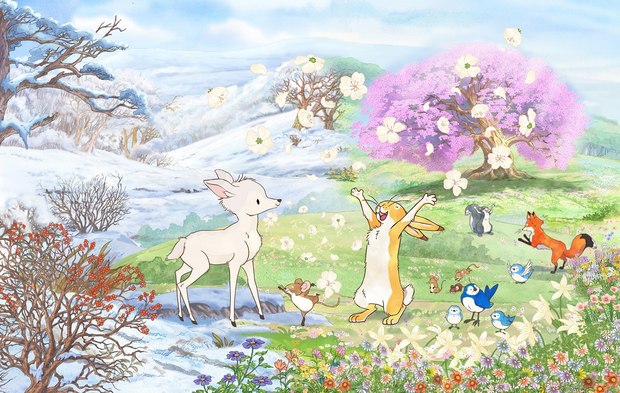 SYDNEY -- SLR Productions has announced the production of two 26-minute Holiday Specials of its award-winning internationally acclaimed preschool animated series, Guess How Much I Love You – The Adventures of Little Nutbrown Hare.

KIKA-Der Kinderkanal will again be a co-production partner with support from one of KIKA’s parent companies, HR-Hessischer Rundfunk of ARD. The newly commissioned Holiday Specials have been acquired by ABC KIDS and ABC Commercial locally with 9 Story Media Group distributing the Easter and Christmas specials internationally.

Following the huge success of the classic 78 x 11-minute preschool series, which has been broadcast in over 180 countries, the Holiday Specials will be produced once again by SLR Productions’ award-winning team consisting of Executive Producer Suzanne Ryan, Producer Yasmin Jones, Director Jo Boag, Script Producer Melanie Alexander and Written by both Melanie Alexander and David Evans.

“I am incredibly proud of these two Holiday Specials and thrilled to be working together again with Executive Producer partners Sebastian Debertin and Tina Sicker of KiKA-Der Kinderkanal,” said Suzanne Ryan, Executive Producer and CEO of SLR Productions. “The Holiday Specials represent the beauty and magic of Easter and Christmas, reminding us that being with family, friends and the ones you love is the greatest gift of all. Little White Fawn and The Long Journey Home are enchanting themed specials that are a delightful extension to seasons one and two of this classic preschool show.”

“Guess How Much I Love You is a huge success here in German speaking Europe not only but especially because of the beautiful series SLR produced with KiKA,” said Sebastian Debertin, Head of Fiction, Acquisitions & Co-Productions of KI.KA-Der Kinderkanal. “To enlarge the brand into a new dimension and the wish to have even more time to tell stories brought us to the idea of coming up with these two wonderful specials, allowing KiKA to also bring great and entertaining stories for bank holidays with Little Nutbrown Hare and his friends!”

“We are thrilled to be distributing the new Guess How Much I Love You Holiday Specials from SLR Productions and KIKA-Der Kinderkanal,” said Natalie Osborne, Chief Strategy Officer for 9 Story Media Group. “They are an absolutely beautiful complement to the series and will undoubtedly become cherished holiday traditions.”

Intent upon finding the fawn, our hero leads his friends on a quest to the ‘place of magical white creatures’. Just when everyone is losing heart, they find the tiny white deer and save her when she falls into a stream of fast flowing melt-water. Set against a background of the Winter snow melting into Spring, the story ends happily as the tiny white fawn joins the meadow friends for games amongst the new Spring flowers. On a bright and sparkling Christmas Eve, Little Nutbrown Hare and his friends Little Field Mouse, Little Redwood Fox and Little Grey Squirrel are frolicking happily in the snow-covered meadow when they stumble across a baby brown bear who is lost and sad. Determined to return their little friend home to his family in time for Christmas, the young heroes venture bravely through the woods and across the valley into the unknown. This epic adventure will touch the hearts of young and old alike, as our friends let nothing stand in the way of reuniting Little Brown Bear with his family, before making their own way home. Throughout this delightful journey we are reminded that the greatest gift of Christmas is being with the ones you love.

The Holiday Specials are based on the bestselling book, “GUESS HOW MUCH I LOVE YOU,” published by The Walker Books Group and written by Sam McBratney and illustrated by Anita Jeram. The book, which is published in 53 languages, has sold 32 million copies globally and in 2014 celebrated its 20th anniversary. The animated series relates the adventures of the Nutbrown Hares and their friends with the same endearing charm and love that has made the book a timeless story time favourite.