Aussie Duo Wins 2016 Pitch This! Competition with ‘Owl and Cloud’ 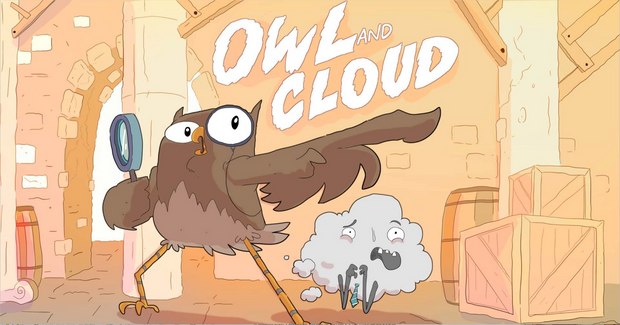 Suren Perera and Thomas Duncan-Watt are the first ever Australian team to win the prestigious Pitch This! pitch competition at the Ottawa International Animation Festival (now celebrating its 40th year) with their original animated series, Owl and Cloud.

The animated series features a pompous yet insatiably curious Owl detective, and his loving assistant, Cloud who are on a quest to regain the favour of their beloved Queen (and their old jobs as her court detectives) by ridding her land of a new breed of dastardly villains.

To win the competition, Perera (below left) and Duncan-Watt (below right) first had to beat out almost 100 professional international pitches for a spot in the top 10, then, after a closed-door pitch to industry panellists, make it to the final two for a pitch on the festival’s main stage. “It was a more than a little nerve-wracking,” Duncan-Watt recounts, “of course we were pleased to get to the final two, but we’d never pitched to a huge ballroom, let alone one full of some of the best in the industry.”

In the end, it was the duo’s energetic presentation, which included a performance of a short storyboard in character, which won the judges, (and the crowd) over. “Tom had a little experience with stage comedy thanks to his Golden Girls puppet show, Thank You for Being a Friend, so I trusted him when he said that wearing props like my ‘cloud hat’ would work,” Suren adds.

The duo met just over four years ago working for top Australian production company Sticky Pictures on projects like Dennis and Gnasher (one of Tom’s scripts for which the series earned its first-ever BAFTA nomination) and Perera’s own short form series, The Dukes of Broxtonia (co-created with Stu Connolly), which was twice nominated at Kidscreen and has screened on Cartoon Network Asia and Disney XD.

It took very little time to realize they worked well together, and began developing their own material. “Although we have very different senses of humour, we make it work to our advantage: after all, if something makes both of us laugh, it goes in,” Duncan-Watt explains.

Of course, winning the competition doesn’t just mean a title, it also meant winning a highly coveted development deal with Corus Entertainment to take their series to the small screen. “Getting the development deal with Corus is a real boon,” Perera says, “We’re both extremely keen on getting Owl & Cloud to production, and having such an amazing team behind us is a huge step.”