Coming to Netflix April 6, the 70-minute special produced by Atomic Cartoons lets viewers use their remotes to decide what the ‘Last Kids,’ will do; first series graphic novel, ‘The Last Kids on Earth: Thrilling Tales,’ hits store shelves the same day. 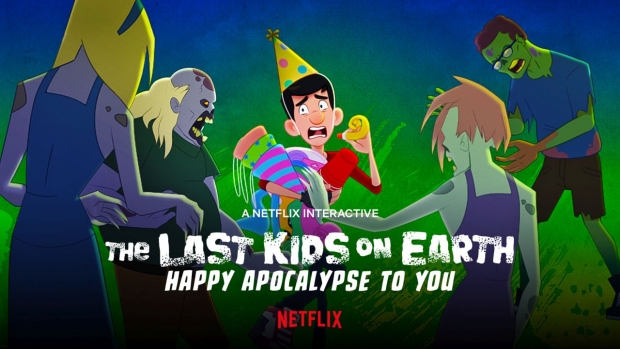 Atomic Cartoons has dropped a first look at the newest installment in the Last Kids franchise. The series' first interactive 70-minute special for Netflix, Happy Apocalypse to You, begins streaming April 6. Hitting stores the same day is the series’ first graphic novel, “The Last Kids on Earth: Thrilling Tales from the Tree House,” by series creator and executive producer Max Brallier.

With the COVID-19 Pandemic triggering an ever-increasing demand for family-friendly content, the new Last Kids interactive special comes at a time that families are spending more screen time together at home.

“With audiences calling the shots, we can’t wait to see what kind of adventures – and calamities – they’ll cook up for Jack, June, Quint and Dirk in this thrilling interactive special episode of The Last Kids on Earth,” commented Matthew Berkowitz, Chief Creative Officer of Thunderbird and Atomic Cartoons, and series executive producer. “We have been so honored by the response our series has received so far, and we’re excited to see how fans of The Last Kids on Earth enjoy having the power – and responsibility – of deciding the fates of their favorite characters on screen!”

In the special, viewers can use their remote controls to decide what the Last Kids will do as Jack (Nick Wolfhard), Dirk (Charles Demers) and Quint (Garland Whitt) try to throw June (Montse Hernandez) a birthday party that turns into an action-packed thrill ride as they encounter monsters and zombies and try to avoid getting eaten in the process.

"The behind-the-scenes journey that brought The Last Kids on Earth to life on screen has been incredible. And now, together with Atomic Cartoons, we’re taking another exciting step forward, giving viewers the power to control the destiny of their favorite characters,” added Brallier. “And being able to time the streaming premiere of our new interactive episode with the launch of the next book in the series, means we’re able to offer fans a double whammy of excitement, laughter and – of course – zombies and monsters.”

To produce the interactive episode, Vancouver-based Atomic leveraged interactive Netflix technology that requires viewers to make choices using their remote controls to advance the story, making this a compelling co-viewing experience for any family’s next movie night. The interactive special marks the latest addition to Atomic’s IP-owned franchise which includes: