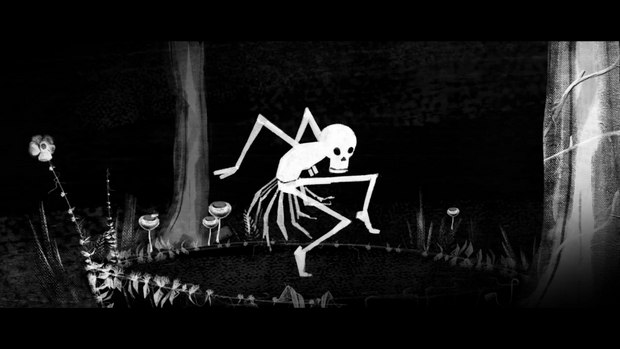 New York, NY -- When swamp rock blues duo The Peach Kings needed a video for the title track of their just-released EP “Mojo Thunder,” they found their match in New York-based design & animation studio Ataboy. The storytelling-driven animated video tells a hypnotic tale of vice and voodoo and explores how cycles of abuse and pain can trigger self-destructive behavior.

“At the onset of the creative process, we were asked to think ‘swamp, dark and psychedelic,’” says Vikkal Parikh, Owner and Creative Director of Ataboy. “We took that direction and crafted a sexy, graphic and engrossing visual story.”

“Mojo Thunder” tells the story of a man trying to escape the pain of his past by indulging in his vices, only to see himself sinking deeper into the grim realities of life. Kris Merc and Benjy Brooke, who served as directors for Ataboy, studied the backgrounds of crime lords and read pulp novels for inspiration.

“The visuals had to leave the viewer a bit haunted and uneasy,” says Merc. “The song really brings out that feeling of darkness, voodoo dreams, and Santeria wishes.”

Since the timeline for the project was condensed -- only one-and-a-half months from start to finish -- once the final storyboards and a working animatic were completed, Ataboy’s team of animators worked in Photoshop to bring the lyrics to life.

“Photoshop animation is a weird beast, but it allows for a direct, textural animation style,” says Brooke. “We were after a look and feel as close to handmade as a computer can offer.”

Before deciding on Photoshop, the Ataboy team experimented with hand-designed options, from working in newsprint to drawing with chalk and white crayons on black cardstock.

“As soon as we heard the song, we were invested in finding the best medium to tell this story,” says Parikh. “Music videos can be a very involved process, as was the case with this one. The entire Ataboy team really pulled out all the stops, and it shows in the final result.”