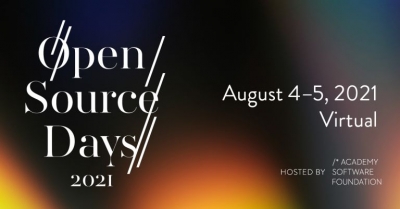 “We are pleased to welcome Maxon and Tangent Animation as new members to the Academy Software Foundation,” commented ASWF executive director David Morin. “Maxon is joining us with a robust portfolio of software products already using our projects, and Tangent Animation with a strong track record of using open source software in animation production. We look forward to working with both companies to accelerate the adoption and development of open source software in filmmaking, motion design and animation.”

The addition of Maxon and Tangent Animation marks continued growth for the ASWF, following the addition of Adobe and the Entertainment Technology Center@USC as members earlier this year. The ASWF has grown significantly in just three years, from 13 founding members to 33 members today.

ASWF has announced its slate of speakers for the upcoming free virtual conference. Attendees will hear from top executives from the Academy of Motion Pictures Arts & Sciences, ILM, NBCUniversal, Netflix, and others when they share updates on popular open source projects establishing standards and best practices in visual effects, animation, and image creation. Attendees will also have the opportunity to engage directly with the broader ASWF community to explore areas of innovation, network, and participate in live Q&As.

Programming highlights include the sessions below, as well as sessions diving into the latest updates and roadmaps on ASWF projects such as OpenColorIO; OpenCue; OpenEXR; OpenTimelineIO; OpenVDB; Open Shading Language; and MaterialX. In the fireside chat open source experts will discuss the impact across industries, as well as universal challenges such as security and supply chain vulnerabilities.

Vendor neutrality, stability for the technology we rely on, networking opportunities with change-makers, access to tools and resources – these are all benefits of open source foundations. In this keynote panel, we’ll hear from ASWF members about why they have joined and continue to participate in the Foundation. We’ll hear about the early days of the ASWF, the progress that’s been made and the possibilities for the future across this rapidly changing landscape.

Charting a Vibrant and Open Plan for ACES 2.0 and Beyond

ACES is a widely adopted, free, and open color and digital file management system used in motion pictures, television and many other motion and still media productions. With the upcoming release of v2.0, ACES will have reached an important milestone by addressing many of the key issues users requested since its original launch. ACES project leaders will discuss the latest developments and engage session participants in a dialog to ensure that ACES evolves as a vibrant, sustainable, and freely available system.

One Year of Diversity & Inclusion Focus in the ASWF

This panel will reflect on the first year as an official ASWF working group. Join the discussion about the foundation’s accomplishments in its first year of programming and outreach initiatives – what has been learned and what does the future hold?

ASWF’s Assets Working Group has been developing a license for production grade assets, to be used for testing and demos, to help the industry better validate software used in the film industry. Join this talk to learn more about the valuable work the Assets Working Group is doing, and the impact being made.